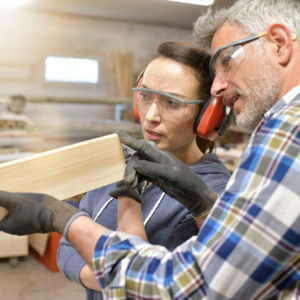 Displaced Workers Could Benefit From Apprenticeships, but for One Labor Regulation in the Way

By most measures, the economy is booming. Unemployment is at a 49-year low of 3.7 percent. The economy grew at an annualized rate of 3.5 percent last quarter. Recent data from the Department of Labor finds wages and salaries rose 3.1 percent in the third quarter, the largest increase in a decade. Yet, even with the economy humming, long-term problems loom.

Despite the current tight labor market, rapid change is coming to the workforce. A recent report published by Dell Technologies estimates “that around 85 percent of the jobs that today’s learners will be doing in 2030 haven’t been invented yet.” Further, in the coming decades, new technology and automation will likely lead to the displacement of many workers from their current occupations.

One part of the solution is to provide workforce development opportunities to workers. To help prepare workers for new jobs that require different skills, the Trump administration has made expanding apprenticeship programs a top priority, as well as encouraging the private-sector businesses to provide workforce development opportunities to their employees.

On October 31, the White House held the Our Pledge to America’s Workers Event, which promoted businesses that have committed to investing in their employees. So far, 165 companies have pledged to create 6,432,283 new opportunities for America’s workers. It is also important to note that all of this has been done with absolutely zero federal funds.

So it’s especially troublesome that a National Labor Relations Board policy could simultaneously stifle expansion of apprenticeships and worker development opportunities.

During the Obama administration, a 2015 NLRB decision may be used to force franchisors and companies that contract out work or rely on suppliers to reconsider extending training and apprenticeship opportunities to employees of franchisees or suppliers.

In a ruling against waste management company Browning-Ferris, the NLRB decided to expand the instances when one employer is held liable for another employer’s labor violations and responsible for bargaining with another employer’s union. That ruling poses a big and uncertain liability when it comes to offering help to franchisees and employees.

In the Browning-Ferris decision, the NLRB overturned 30 years of precedent that determined when two companies are considered joint employers. Previously, one company had to exert direct control over another firm’s workers to trigger joint employer liability. But now, joint employer liability may be established if one company exercises indirect or “unexercised potential control.” Even lawyers defending that new standard in court could not explain that ambiguous standard. Indirect control could mean as little as a franchisor providing employees at franchisees with training or apprenticeship opportunities.

But there is hope. With some new appointees to the NLRB, the board is now seeking to restore the traditional joint employer standard, which will free companies to more broadly offer workforce training opportunities. On September 14, the NLRB proposed a rule that would clear up the uncertainty caused by the Obama-era joint employer standard.

It won’t be easy. A handful of Democrats are trying to block the NLRB from restoring the traditional joint employer standard. At the end of October Rep. Joe Kennedy III of Massachusetts urged the NLRB to withdraw a proposed rule. And as reported by Bloomberg BNA, “Senator (Patty) Murray of Washington and Rep. (Bobby) Scott of Virginia, the highest-ranking Democrats on the Senate and House labor committees, asked the NLRB earlier this month (October) to provide more justification for its joint employer proposal.”

NLRB Chairman John Ring responded to their questions, but a Democratic aide for the House Education and the Workforce Committee told Bloomberg Law that the “board’s letter answering the inquiry from Murray and Scott was ‘non-responsive.’”

Meanwhile, it’s workers who will be harmed by political opposition to the new NLRB rulemaking. So far, it appears that NLRB Chairman John Ring is undeterred. On Twitter, Ring said the proposed rule “will not be derailed by attempts to create political distractions.”

The truth is both political parties should support a rule that would allow companies to offer apprenticeship and workforce development opportunities to as many workers as possible.