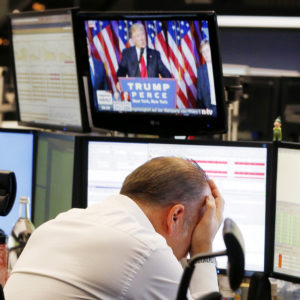 A broker reacts as President-elect Donald Trump shows up on a television screen at the stock market in Frankfurt, Germany, Wednesday, Nov. 9, 2016. (AP Photo/Michael Probst)
[IS] Opinions

Already in 1965, Valery Giscard d’Estaing, President Charles De Gaulle’s minister of finance, complained about the “exorbitant privilege” that the U.S. dollar afforded to the United States. By this, he meant that the fact that the dollar served as the world’s international reserve currency that foreigners were eager to hold, the United States could run continuous trade deficits without fear of provoking a balance-of-payments crisis. This in turn allowed the United States the enviable luxury of being able to consume more than it produced on a continual basis.

The dollar’s pronounced weakness since President Trump took office in January 2017, together with his seeming abandonment of the strong dollar policy consistently espoused by his predecessors over the last 25 years, has to raise questions about how long the United States will continue to enjoy its exorbitant dollar privilege. This in turn could pose serious obstacles to today’s basic economic challenge of improving U.S. living standards for America’s working population.

One reason to be concerned about the dollar’s future trajectory is its very poor performance over the last nine months. With the Fed beginning the process of normalizing interest rates and with it now actively talking about the need to start reducing the size of its bloated balance sheet, one might have expected that the U.S. dollar would strengthen as U.S. monetary policy became more restrictive. This would seem to have been especially the case at a time that the Bank of Japan and the European Central Bank are still continuing aggressively to print money and to stick to very loose monetary policy stances.

Yet, despite these supportive factors, far from strengthening, the dollar has managed to slump by around 10 percent since January. This has to suggest that under the Trump administration the dollar might be losing some of its allure to foreign investors.

Another basic reason to be concerned about the dollar’s future is the seeming loss of foreign confidence in U.S. economic policy management in general and concern about the inconsistencies in President Trump’s budget policies in particular. At a time when the U.S. economy is close to full employment, the Trump administration continues to advocate an unfunded tax cut and a large increase in infrastructure spending. If implemented, that budgetary policy approach risks eroding the level of U.S. public sector savings. That in turn will almost certainly increase the U.S. trade deficit and could bring us back to the “twin deficit” problems of the past.

It would be a great mistake if the Trump administration were to continue to take for granted the exorbitant privilege that the U.S. dollar has afforded to our country throughout the post-war period. Since, especially in the context of competition from other currencies like the euro, that privilege can be easily lost through the pursuit of careless economic policies at home.

Should the U.S. exorbitant privilege indeed be lost and should capital not flow to the United States as readily as it has until now, the United States will become like any other country that is forced to live within its means. This would require painful adjustment to U.S. living standards as we would no longer be able to consume on an indefinite basis more than our country produces.