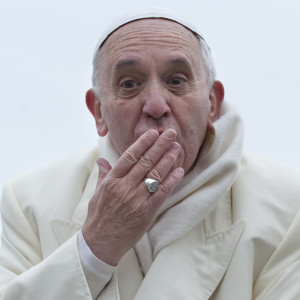 Posted to Finance May 07, 2018 by Antony Davies and James R. Harrigan

Pope Francis repeatedly displays a disturbing ignorance of basic economics and government, from his concerning pronouncements on economic policy to his unbridled faith in politicians.

His confusion seems to flow from a single source: a near complete misunderstanding of human freedom. The church he heads is based in no small part on free will, which makes Francis’ recent thoughts on the move toward greater human freedom nothing short of incomprehensible. But the current pope appears more interested in human institutions that exert power over human beings than in the human beings themselves.

He proved this again last week in his Message from the Holy Father to the participants in the Plenary Session of the Pontifical Academy of Social Sciences, wherein Francis turned his scolding attention to libertarians, or at least what he imagines libertarians to be. He appears unable to imagine free individuals coming together in community absent governmental coercion. He shows an utter disdain for individuals, what they want, and what they can accomplish voluntarily. Worst of all, as a consequence of understanding neither, he conflates libertarianism with individualism. But that doesn’t stop him from offering any number of misguided opinions on the matter.

According to Francis, the cause of human freedom “minimizes the common good” in the name of uncaring individualism, and “libertarian individualism denies the validity of the common good.” Impossible to Francis is that people might willingly choose to facilitate the common good without being forced to do so. His own church in the United States, and indeed around the world, is an entity that thrives precisely because it is a voluntary association of individuals who choose to belong. He does not seem even to see this.

Libertarianism, or the cause of human freedom, is hardly antithetical to community. A casual look at almost any data tells the story. As humanity has become more free, human communities have flourished exactly as have the individuals that comprise them. Over the past century, child labor rates have fallen by 80 percent, global income inequality has declined dramatically and continues to fall, global gender inequality has declined, life expectancy has doubled, world per-capita real income has quintupled, and the fraction of people living in extreme poverty has fallen from 70 percent to under 10 percent — the lowest it has been in all of human history.

Data show that these improvements are strongly associated, across time, across countries, states and cities, with improved freedom. As human beings have become more free, and as their governments’ powers have waned, people’s lives have improved dramatically and their communities have flourished. These upward trends all began at the end of the 18th century, at precisely the time that the rights of the individual began to take center stage.

But Francis would have us turn a blind eye to the single cause of more human happiness, prosperity and community than any other, including his own church. Why? Because, he says, individualism leads to a condition in which it is “… only the individual who decides what is good and what is bad.”

But this ignores the fact that humans find virtually the whole of the meaning in their lives in community with others. Freedom does not, and has never meant that the individual decides what is good, bad or best. It means that individuals, more than government, are the better judges of what is good, bad and best for themselves.

The common good emerges from this. How do we know? All available evidence points to it. And if evidence isn’t enough for Francis, he should simply turn to his church’s own catechism, which states: “The right to the exercise of freedom … is an inalienable requirement of the dignity of the human person.”

One might excuse a pope for missing critical economic evidence, but not his own church’s teachings.