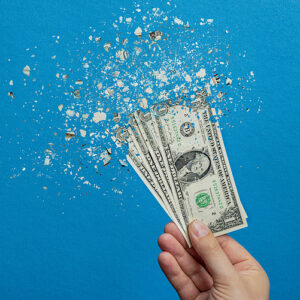 To paraphrase Jerry Seinfeld’s would-be paramour, “Inflation is real….and it is spectacular.”

Spectacularly bad, says economist Stephen Moore, noting the annual inflation rate in the U.S. surged to 6.2 percent in October, the highest since November 1990.

And the reason is simple, Moore says. “There are too many dollars chasing too few goods.”

Democrats who just passed Biden’s $2 trillion ‘Build Back Better’ bill insist it doesn’t add to current inflationary pressures. According to polls, the American people don’t agree. A November 18 poll from Scott Rasmussen found 92 percent of voters believe inflation is a serious problem, and 56 percent believe the Build Back Better plan will make inflation even worse.

And while there are some economists backing the Democrats’ spending plan, most say the impact — particularly in the short term– will be to send prices higher.

“You can’t just continue to flood money into the economy at this multi-trillion-dollar rate and expect prices not to rise,” says Moore, who served as an economic advisor to President Donald Trump. “We passed a $2 trillion spending bill at the beginning of the Biden administration, we already had $1 trillion in the pipeline from the COVID-relief bill, and you’ve got the trillion-dollar infrastructure bill they want to pass.”

Obama economic advisor Steven Rattner agrees. “The original sin was the $1.9 trillion American Rescue Plan, passed in March. The bill — almost completely unfunded — sought to counter the effects of the Covid pandemic by focusing on demand-side stimulus rather than on investment. That has contributed materially to today’s inflation levels,” he wrote in a New York Times op-ed.

That is why the “Build Back Better” plan – which the nonpartisan Committee for a Responsible Federal Budget (CRFB) says is actually around $5 trillion in new spending – is likely to make things worse, at least in the short term.

Other factors are adding to the inflation problem, too.

“Then you have the Biden war on energy that is really dramatically increasing the price of gasoline at the pump,” Moore said. “Energy is a factor of the production of everything that we have, and when you increase the price of energy of every good and service in the economy.”

And then there’s the impact of the Federal Reserve’s monetary policy, which Demond Lachman, an economist for the American Enterprise Institute (AEI), says is a major contributor.

Neither economist believes the inflation we are seeing today is going away anytime soon.

“I think this is going to be with us a lot longer than the Fed and the administration think,” says Lachman.

“I would note that everyone from the Federal Reserve to Wall Street agree with our assessment that inflation is already expected to substantially decelerate next year,” White House press secretary Jen Psaki told reporters earlier this month. “Economists across the board also agree that the president’s economic agenda will not add to inflationary pressure and will ease inflationary pressure over the long term.”

And House Speaker Nancy Pelosi pledged before the bill was passed, “Build Back Better will grow the economy without increasing inflation, because it is fully paid for.”

“I don’t see what they’re doing to bring inflation down,” said Lachman. “Politically, I think this is hugely a big issue, I don’t see that they’ve got any policies to deal with it, (and) the Fed should be very concerned.”

“It’s just a sad state of affairs because we need educated lawmakers,” said Moore. “If they were to pass that horrific spending bill, it would make inflation worse, much worse.”