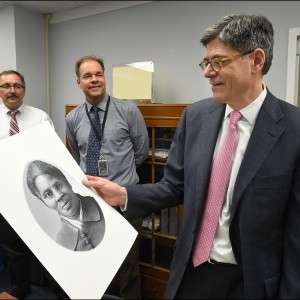 Treasury Secretary Jacob J. Lew visits the Bureau of Engraving and Printing after announcing changes to currency.
[IS] Opinions

The color of money. That’s the latest hue-coded controversy in our midst.

Last week, the secretary of the treasury, Jacob Lew, announced that human rights champion and anti-slavery activist Harriet Tubman will replace former president/slave master Andrew Jackson on the front of the $20 bill. She will become the first black woman to appear on U.S. paper currency.

It’s also about trying to alter a piece of history through erasure of one figure to promote another.

Question: Is that right? If observers, especially young folk and millennials, don’t know the other side of history — that is, the negative side — how will they know what not to repeat.

Another question: What about the Father of the Country … George Washington, the ultimate slave owner, first president and top general? He’s the front man for the $1 bill, a city and a monument. Do we grab the erasers for him, too, a transcendent figure who became a slave holder at 11 years old?

And more currency alterations are forthcoming, though they appear more logical in expanding the historical discourse. Instead of erasing it.

Alexander Hamilton, this nation’s first secretary of the treasury who also paved a fascinating legacy as an abolitionist, will remain on the front of the $10 bill, but prominent figures advocating the women’s suffrage movement, including Susan B. Anthony and Sojourner Truth, will appear in the redesign on the back of the bill.

On the $5 bill, Abraham Lincoln will stay on the front, but major events that occurred at the Lincoln Memorial will occupy the back of the paper money note, including opera singer Marian Anderson’s concert there in 1939, Dr. Martin Luther King Jr.’s “I Have a Dream” speech in 1963 and former first lady Eleanor Roosevelt, who spearheaded Anderson’s appearance at the Memorial.

These moves were hailed by civil rights activists as positive changes in the move to honor those historical figures who strived to right a litany of social wrongs. Many rejoiced that Andrew Jackson, the seventh president, was stricken from the front of the $20 bill because of his history as a staunch slave owner and his unapologetic persecution of American Indians.

Jackson, literally, will take a back seat to Tubman on the $20 bill because his likeness will move from the front side to the back side of the bill.

One wonders why the reverse optic wasn’t instituted, with Tubman on the back.

The consummation of the redesigned bills will be publicly displayed in 2020, marking the centennial celebration of women’s right to vote that culminated with the 19th Amendment, and will be mass distributed by 2030, beginning with the $10 bill.

The same day that Lew made his announcement, the renowned Southern Poverty Law Center — a nonprofit, social rights advocacy organization based in Montgomery, Ala., that tracks hate groups — released its findings regarding tributes and honors connected to the Confederacy:

—There are 1,503 examples of monuments and statues; flags; city, county and school names; lakes, dams and other public works; state holidays, and other symbols that honor Confederates.

—There are more than 700 Confederate monuments and statues on public property throughout the nation, with the overwhelming majority in the South.

—There are nine official Confederate holidays in six southern states.

—There are at least 109 public schools named after prominent Confederates, many with large black student enrollments.

Presidential candidate Donald Trump — as typical of The Donald — discounted Harriet Tubman’s appearance on the $20 bill as “pure political correctness” zooming out of control. “Well, Andrew Jackson had a great history, and I think it’s very rough when you take somebody off the bill,” Trump said during a town hall on the “Today” show last week. “I think Harriet Tubman is fantastic, but I would love to leave Andrew Jackson or see if we can maybe come up with another denomination.”

Perhaps, instead of worrying about who is on the cover of greenbacks, the money activists and the federal government should be more concerned about helping those who need paper currency the most. It’s not about the face on the paper; instead, it should be about whose hand is attached to it.

If a U.S. citizen is living not only day to day but hour to hour, does that citizen really care if there’s a feud pitting the Harriets vs. the Andrews?

Don’t think so. Symbolic gestures don’t help that cause. Especially in the wake of a massive loss of good-paying manufacturing jobs and a steady increase in low-wage positions.

According to The Washington Post, beginning this month, as many as 1 million Americans will stop receiving food stamps by the end of the year, the consequence of a controversial work mandate enacted as the economy improved. The mandate states that unless a person has children at home or is disabled, he/she must work at least 20 hours a week to maintain food stamp benefits.

And there’s the black albatross in this very public battle to own equality in the United States. Several streets in this country are named after Malcolm X, a lightning-tongued black nationalist in the 1960s who outwardly defamed white folk as “blue-eyed devils” during the height of the civil rights movement.

Remember him? Actor Denzel Washington portrayed the firebrand, racially provocative leader in an eponymous movie in the early 1990s that should have earned an Academy Award.

So, in the interest of fairness, should every street and park named after Malcolm X be altered, in the same so-called progressive vein as the $20 bill.

The next obvious issue is where will the line be drawn on eradicating slave holders as the focal point of national honors from statues to names on public buildings and schools, as well as streets and thoroughfares? And who will draw that contentious line?

Exit Washington D.C., head across the other side of the Potomac River to Virginia, there is a street called Jefferson Davis Highway. During the Civil War, Jefferson Davis was president of the slave-lusting Confederate States of America in the 1860s simultaneously as Mr. Lincoln was serving as the president of the conventional United States of America.

Still, whether we are discussing Malcolm X or Jefferson Davis, there is a common bond. They are historical figures. Still history. For the books.

The Civil War is a part of U.S. history. So is slavery. So is the Confederate flag. So is legal segregation.

The same is true for slave holders, such as Andrew Jackson. No amount of renaming and reshuffling and rethinking can erase that.