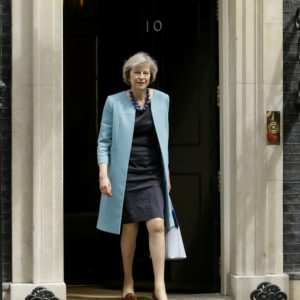 The casual smackdown that Donald Trump delivered to the European Union and NATO last weekend only fortified Europeans’ impression that the American president-elect isn’t looking for warm relations. Now, the next six months will bring historic decisions about the future of Europe’s economic integration and the world’s most successful military alliance.

Trump’s election has thrust “Europe,” long used to a certain privileged, if sometimes ambiguous, status in American foreign policy, onto everyone’s list of things to tend to after Jan. 20. But, with only tweets and shoot-from-the-hip interviews to go on, no one really knows how the relationship will unfold.

“What in fact is really going to happen when everybody sits down at their desks at the White House?” said Jackson Janes, president of the American Institute for Contemporary German Studies. “The Europeans can’t know.”

What they can know doesn’t offer much hope for harmony.

Trump and some of his closest advisers already have working relationships with rightist politicians in Britain, France and Austria. His election has also surfaced plans, previously the province of obscure websites and lesser-known pundits, that aim to use American influence to break up the European Union. And while Trumps’ view on those plans is unknown, he’s a firm advocate of a British-American free-trade deal, whose negotiation could put the United States on a collision course with the other 27 European Union members.

The deepest source of European unease with Trump may be his tight links with right-wing politicians, and the lack of lower-rung officials who are even known to European governments.

Heinz-Christian Strache, leader of Austria’s Freedom Party, met with Michael Flynn, Trump’s choice to be national security adviser, last month. This party, founded by a collection of ex-Nazis and other political outsiders, has long sought to break into the Austrian mainstream, and narrowly lost a recent election for the country’s largely ceremonial presidency.

And Marine Le Pen, leader of France’s National Front, has been sighted lurking outside Trump Tower in Manhattan, though no meetings were confirmed.

In any other transition from one major American party to the other — 1981, 1993 or 2001 — European officials could fall back on people whom they knew would staff the new administration. These former officials, think tankers, and retired military officers provided a network of contacts, and their temperaments were known to the world of diplomacy.

This time around, Europeans know that Steve Bannon, the former head of the website Breitbart, who is now a White House adviser to Trump, has an open line to European fringe politics.

Trump has also interviewed Ted Malloch, a former United Nations official and traveling pundit, as a potential U.S. ambassador to the European Union in Brussels. Malloch openly supported the departure of Britain from the EU, and has echoed Trump’s disparaging words about the EU.

“Seeing this kind of commentary up front, the danger he’s running is, simply, that no one will listen to him,” said James Elles, a former conservative member of the European Parliament. “It would be as though a European ambassador were walking around criticizing the union of the American states.”

Over the weekend, Trump predicted that “more countries will leave” the EU and promised the United States would throw itself into negotiations with Britain for a free-trade deal after he takes office. British Prime Minister Theresa May will travel to the United States to meet Trump in February.

“We’re gonna work very hard to get it done quickly and done properly. Good for both sides,” Trump said. “We’ll have a meeting right after I get into the White House and it’ll be, I think we’re gonna get something done very quickly.”

Combining those two points — about the EU and a trade deal with Britain — suggested that Trump backs a plan, hinted at by Bannon at times, to pick off other European countries from the bloc by offering them similar agreements. Even if this strategy fails, the friction generated between the United States and Europe would be enormous, probably greater than any issue in transatlantic relations in the past 50 years.

More urgently, the timing and symbolism of a negotiation with Britain could immediately put Trump crosswise with the rest of Europe.

May announced in a speech this week that Britain would pursue a “hard Brexit,” as its departure from the EU has become known. Specifically, it will give up access to Europe’s broad and deep economic integration, and take full control of its own borders, immigration having been a central issue in the Brexit campaign.

That process will unfold over two years, beginning sometime in the spring, as Britain replaces EU-mandated rules with its own. Until then, the country will remain a member of the EU, and cannot conclude trade deals with other countries on an independent basis.

If Britain and the United States even start a negotiation before its European Union membership ends, it runs the risk of hardening Europe’s negotiating stance in the Brexit process. Britain, in short, would be seen as a sort of stalking horse for Trump’s apparent break-the-EU strategy.

“If the Europeans think they are sitting across from Trump and the UK, they will fight that much harder,” said one former European official.

The stakes are high for Britain, which wants to preserve London’s status as a global financial capital in the face of Brexit, and also needs a solid trade deal with the rest of the EU.

For the rest of Europe, the central challenge is hammering out a common agenda so it can avoid a new relationship based entirely on reacting to Trump’s tweets and emerging policies, Janes said. That could have to do with Russia, or trade, or even China.

“Europe needs to figure out what it can do together,” Janes said. “Because if it doesn’t, Trump will pick them apart in five minutes.”