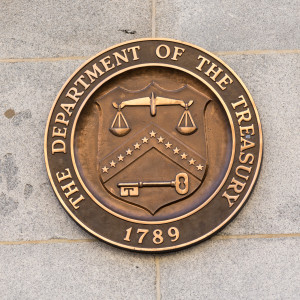 A leaked Treasury memo obtained by InsideSources may raise new questions about the government’s compliance in turning over documents to a U.S. District Court prior to a ruling made last fall in a case brought by shareholders of Fannie Mae and Freddie Mac.

In September, U.S. District Judge Royce Lamberth dismissed a suit against the US Treasury over its seizure of all profits from the two Government-Sponsored Enterprises (GSEs).  Lamberth’s decision is currently being appealed.

But during that case, Treasury was required to turn over all relevant materials to the court for review. The memo obtained by InsideSources, dated January 4, 2011, was never disclosed to the court as part of the Administrative Record.

The memo was authored by Jeffrey Goldstein, the Undersecretary for Domestic Finance. While another memo by Goldstein from two weeks prior had been given to the court, the failure of Treasury to turn over a highly-relevant planning memo may raise doubts over whether Lamberth was given all of the relevant information prior to his decision.

Besides its exclusion from the Administrative Record in the first place, the memo could create legal issues for Treasury, as it seems to argue against following the federal statute (HERA) that governs the conservatorship.

Additionally, the memo raises other questions over Treasury’s favored reform—to “end the GSEs.” Efforts to wind down the GSEs are described as promoting a “bank-centric model” that “benefits larger institutions” and could exacerbate concerns over mortgage lenders being too big to fail. Borrowers at smaller institutions could expect higher costs. Treasury foresees reduced use of 30-year fixed rate mortgages, and the memo states, “markets would be subject to greater swings in spreads and liquidity and credit pricing would be more pro-cyclical.”

The memo also contrasts public statements made by Treasury that the GSEs would need 10 percent capital ratios.  Privately, it states that Treasury believes the number to be closer to between 3-4 percent.

The legal implications in the disclosure of this memo are unclear.  However, its exposure will probably raise questions about the existence of other undisclosed documents. Treasury simultaneously faces more than a dozen other lawsuits related to the profit sweep.

A Treasury spokesman tells InsideSources: “The flawed GSE business model, which allowed private shareholders to reap substantial profits from an implicit government guarantee at the taxpayers’ expense, was and is unsustainable.  This has been the Administration’s consistent position, set out in the White Paper and the President’s housing principles.  Both recapitalization of the GSEs and draws against the existing Treasury backstop would come at taxpayers’ expense.  We continue to believe that the only way to responsibly end conservatorship of the GSEs is through comprehensive housing finance reform legislation.”

The full memo is available below. 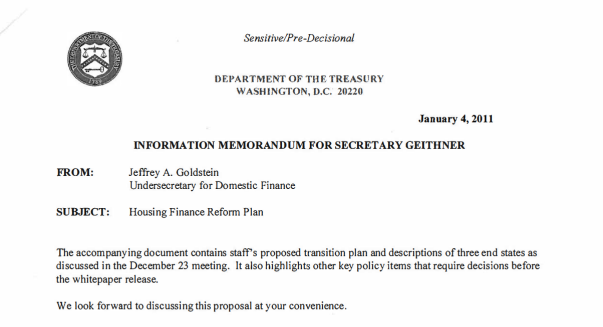