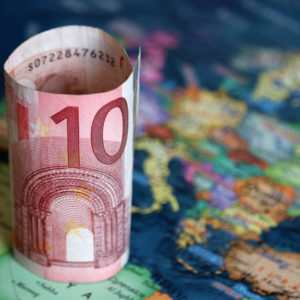 Earlier this year, sky-high inflation forced the Federal Reserve to slam the monetary policy brakes. The same appears to be happening in Europe, where the European Central Bank (ECB) is being forced to reverse course to contend with inflation at the highest level since the euro’s 1999 launch.

It would be a gross understatement to say that financial markets have not received well the Fed’s announcement that it plans to raise interest rates in 50 basis point steps at its next two meetings. Nor have they warmed to the idea that soon, the Fed will be removing as much as $95 billion a month in liquidity from the markets by not rolling over the bonds it holds at maturity.

Since the start of the year, the stock market has declined by 20 percent. The bond markets, too, have fallen by a similar amount, the cryptocurrency market has fallen by 50 percent, and emerging market spreads have widened markedly.

The net upshot is that U.S. household wealth has evaporated $12 trillion, or 50 percent of GDP. This is bound to cause these households to tighten their belts to rebuild their savings. That is the last thing that the U.S. economy needs when the Biden fiscal stimulus is fading, high mortgage rates are causing housing demand to crumble, and a strong dollar is making it more difficult to export.

Now it is the ECB’s turn to make a significant policy shift to deal with inflation. Recently, Christine Lagarde made clear that the ECB will have put an end to its longstanding policy of negative interest rates by the end of September. More significantly, she underlined that it would also end its hitherto aggressive bond-buying programs.

The main risk that the ECB’s policy U-turn now poses to global financial markets is not so much that it will no longer be adding to global financial market liquidity by its bond-buying activity. It is, instead, that the ECB will no longer be there to buy on a massive scale the bonds issued by the Eurozone’s periphery governments in general and by the Italian government in particular.

Over the last two years, the COVID-19 pandemic has done severe damage to the economic periphery’s already shaky public finances. As an example, in Italy, the Eurozone’s third-largest economy, the budget deficit ballooned and the public debt- to-GDP ratio skyrocketed from 135 percent before the pandemic to 150 percent at present.

Despite their dubious ability to grow their way out from under their debt mountains while stuck within a euro straitjacket, the economic periphery’s governments have had no difficulty financing themselves at record-low interest rates. This was largely due to the ECB using its Pandemic Emergency Purchase Program to buy up almost the entirety of those governments’ debt issuance.

With the imminent end of the ECB’s bond-buying programs and with scheduled Italian parliamentary elections next year, the question has to be asked: Who will now be covering the Italian government’s 700 billion euros annual gross financing needs? To underline this point, in anticipation of the end of the ECB’s bond-buying programs, the Italian government bond spread with respect to Germany has doubled to around 200 basis points or to a similar level immediately preceding the pandemic.

In 2010, the Greek sovereign debt crisis shook world financial markets. Now that those markets are already under strain due to Fed tightening, the last thing that we need is a sovereign debt crisis in Italy, a country whose economy is 10 times the size of Greece’s. Yet, if the European economy succumbs to another recession as a result of ECB monetary policy tightening, that is what we should be expecting to happen.