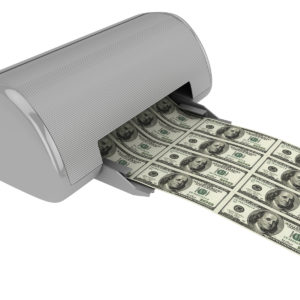 When the next president settles into the Oval Office, the federal debt will be just shy of $20 trillion. No government in history has ever owed so much, yet neither major party candidate is addressing the fact that our government is unsustainable. The debt is already making it impossible for the government to conduct either fiscal and monetary policy.

By pushing rates to near zero, the Fed has lost the ability to stimulate the economy. As important, it has also lost the ability to cool the economy. The federal debt is now so large that the Fed can’t raise rates for fear of threatening the government’s financial health. Just a 1 percentage point increase in interest rates will cost the government, on an annual basis, twice as much as the Iraq and Afghanistan wars combined.

To conduct fiscal policy, the government must increase spending during recessions. But without a budget surplus, the only way to spend is to borrow, and the government is running out of places to borrow. Its single largest creditor, the Social Security Trust Fund, has lent the government almost $3 trillion. Within three years, the trust fund will have no additional money to lend, and within 18 years it will need the full $3 trillion back. Not only is the government losing its largest financial backer, but that backer will soon become its largest cash drain.

Meanwhile, sensing the coming storm, major foreign lenders have been cutting back on their lending. There is simply no one left from whom our government can borrow large sums of money.

When there is no feasible way to conduct monetary or fiscal policy, political desperation and market forces are all that remain. And these forces will assert themselves in predictable ways.

Within the next decade, the government will begin means testing Social Security recipients. Politicians will point to people who are “privileged” enough to have accumulated savings, and will tell those people they are no longer eligible for Social Security, either in whole or in part.

But that won’t be enough.

The government will then nationalize tax-deferred retirement plans. Partial confiscation will ensue, and nearly everyone in the United States will come to have a very difficult retirement.

But even that won’t be enough.

So it will simply print money.

The government will print money because that will be the only arrow left in its quiver. Significant inflation will ensue, destroying what’s left of people’s savings.

The government must freeze its entire budget for six years so that the economy can catch up. At the end of those six years, we will have a balanced budget. The government can then resume growing as long as it does not grow faster than the economy. This crash diet will not solve the debt problem, but it will stop it from getting worse. And with consistent balanced budgets, over a couple of generations, the economy and the tax base will have grown enough to make the debt moot.

Nothing since the Great Depression and World War II will rival the political and economic pain of this plan. But that pain will be nothing compared to what awaits us if we do nothing.