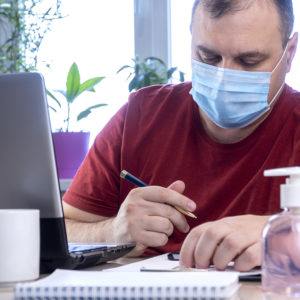 Future Indicative — Work From Home Will Change Everything

Dimly through the fog of the future some structures are emerging. Some of the purely physical are becoming discernible. The changes in work, collective consciousness and play are harder to bring into focus.

We — call us a ravaged generation — will face a future, the future indicative, radically different from that past that we have known.

The obvious is that work is changed, rearranged and at times lost. A lot of real estate will be begging for a mission or will have to face the wrecker’s ball. Shopping centers will see huge change, maybe devastation.

Those big-box stores that anchored shopping centers will be fewer. Some might be converted to gyms or old-fashioned markets with dozens of small stalls. But these uses are limited, and those cinder-block behemoths are many.

Some have suggested that big-box stores can be converted to affordable housing. But architects say it is easier to knock them down and build new homes on their sites. Like the bomb craters that dotted London after World War II, these will be a kind of ruin for some time, a reminder as to how life was.

After the shopping centers, come the office buildings — the very symbol of a modern city, from the grand Empire State Building in New York to the flashy, all-glass Shard skyscraper in London to the wildly imaginative buildings that were built as symbols around the world as much as needed work space. Now they’ll be sentinels of the city of the past.

The short story is fewer people will be going back to work in offices. Telecommuting has rapidly come of age; it is acceptable and even desirable. Many, like myself, won’t like it.

Human contact has been part of work since urbanization began. Indications are that we’re going to be less urbanized, more suburbanized and ruralized.

People who have commuted vast distances into cities — like those who left home at 4 a.m. in Connecticut to be at their desks in Manhattan at 8 a.m. — will sleep in without guilt.

It isn’t just that COVID-19 has forced us to work differently, at home and separated, it’s that digitization has matured enough to make it possible, almost in confluence with the demands of life under the virus. Magically, Zoom has changed just about everything. It’s been not only a liberating force but also a force for change.

But huge change and the innovation that will accompany it will have a price.

One survey found that 53 percent of the nation’s restaurants will never reopen, and a lot of wonderful people will be out of work — for a long time. Restaurateurs are the most entrepreneurial of people, and many will open new venues. But that takes time and capital.

This loss of traditional work, which applies across the hospitality industry, will have deleterious effects elsewhere. For example, the fishing industry can’t sell all its catch. It has always depended on the restaurants for sales.

COVID-19 isn’t alone in reshaping the future. For years digitization and artificial intelligence, which have made telecommuting possible, have been subtracting jobs.

Farming, for example, is undergoing relentless change. Today’s farmer is more a systems manager than the renaissance figure of the past who could help a cow give birth, repair a tractor, taste soil to determine its pH, and handle the harvest with migrant help.

Now tractors and farm equipment are fully digitized and can operate from a laptop on a kitchen table, and the harvest is increasingly automated by sensitive robots with multiple sensors guiding kind claws.

It’s a new world, and we need to be brave and imaginative to master it.