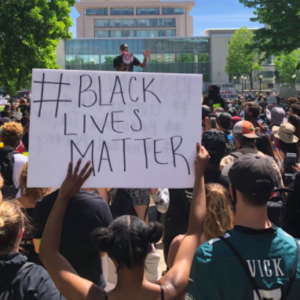 In Nashua, the local Black Lives Matter chapter has called out state Sen. Dan Feltes over his flip-flop on the death penalty in the Michael Addison case.

“Just hours after touting an endorsement from New Hampshire State Troopers, Sen. Feltes has flip-flopped in support of the death penalty,” they tweeted. “How can BIPOC trust our candidates for Governor to lead on racial justice if they’re willing to trade positions for support from law enforcement?”

In Manchester, the local BLM group tweeted its frustration over Republican silence about a social media post by GOP state Rep. James Spillane that appeared to encourage violence against BLM members.

And on Thursday, the Black Lives Matter Seacoast chapter released a list of demands in frustration over what they describe as a lack of action.

“The time for change has come. We are not willing to accept any more figurative words of change from our elected officials. Transparency and accountability has been preached as top priority for our elected officials and law enforcement and they must be held to that standard,” the statement read. “Black Lives Matter Seacoast is releasing the following set of demands to the Candidates for State Legislature, Sheriff, County Attorney, Mayor, Town Councils, Board of Aldermen/Selectman and School Board.”

In short, the state’s Black Lives Matter movement is determined to be a part of state politics as the November election approaches. But will they have any impact on the behavior of state politicians?

“We are tired of waiting for this change to occur,” Clifton West Jr. of Black Lives Matter Seacoast told SeacoastOnline. “We’ve seen these representatives, these senators, these city councils and police chiefs say that they want this change and that change, they support this or that, but really we haven’t seen that happen. We haven’t seen it locally.”

One reason for the lack of action could be the proposals themselves. Among the demands BLM Seacoast wants local candidates to meet:

All of these demands have something in common: They’re not political winners in New Hampshire — as evidenced by the fact that few, if any, state and local candidates are running on them.

Suburban moms concerned about law and order (which has tied COVID-19 as a top issue in New Hampshire) aren’t interested in having the local school police officer sent away, or for police to lose the ability to use tear gas at a time when their TV screens are filled with politically inspired street violence.

How many state legislative candidates in competitive races want to campaign on the platform of “Get the cops out of schools and send them to court to get sued?” And there are many competitive races in the Seacoast area, including State Senate District 24 between incumbent Democrat Tom Sherman and Sununu-supported newcomer Lou Gargiulo. There are plenty of competitive House races in Hampton, Stratham, Rye/New Castle, etc. too.

Is it smart politics to fully embrace BLM and its agenda now, an agenda that calls for a cop killer to have his sentence commuted? Ask Dan Feltes.

As law and order continues to creep up as a top issue for New Hampshire voters, the BLM agenda of decarceration, decriminalization of drug offenses and rolling back resources for police isn’t as popular as it once was.

A new poll finds support for BLM nationwide at 55 percent, down 12 percent since June. BLM’s political support appears to mirror that of President Barack Obama, who Americans liked personally and wanted to support, but whose policy positions were so unpopular they helped hand Congress to the Republicans in off-year elections.

Few New Hampshire politicians have spoken out against the Black Lives Matter proposals. (Though there was scattered booing when they were mentioned from the floor of the House during Wednesday’s veto session.) But how many candidates who have to face the voters in November will show up Saturday afternoon, when BLM holds a “Pledge for Chain” rally?

The Black Lives Matter list of demands is below:

All Candidates for State Legislature

All Candidates for County Attorney

● We demand ​annual training hosted by a Black Lives Matter Seacoast recognized trainer, of all
prosecutors on implicit bias, personal and interpersonal racism, systemic racism and anti-racism.
● We demand that prosecutors consider the likely impact of racism and implicit bias on Black
people and other people of color who have been brought into the criminal justice system in
determining a fair sentence.
● We demand that prosecutors report to police agencies when a judge has ruled that an officer
has acted unconstitutionally, when the prosecutor has formed that legal conclusion, or when
the prosecutor has a reason to suspect the officer’s actions were impacted by explicit or implicit
bias.

All Candidates for Sheriff and Current Police Chiefs

All Candidates for Mayor, Town Councils or Board of Aldermen/Selectman

● We demand investment into social services, such as homelessness, substance use, mental health
and domestic violence treatment facilities.
● We demand a detailed, annual, specific spending report for police expenses to be made
available to the public.
● We demand the establishment of a civilian review board to oversee local policing.
● We demand banning the possible use of tear gas and rubber bullets in the respective town/city.
● We demand that the implementation a policy called Recall in which the eligible voters of
town/city have the ability, by petition, to demand the removal of an elected official.