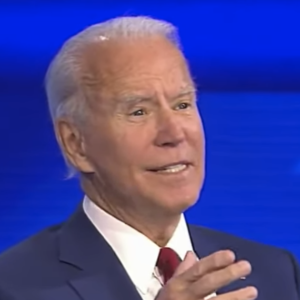 “It is the presidential responsibility to lead. And he didn’t do that,” Biden said. “We’re in a situation where we have 210 plus thousand people dead. And what’s he doing? Nothing.”

It’s true that, according to polls, most Americans disapprove of how President Trump has handled the pandemic. However, Biden’s claims regarding China and COVID-19 run counter to the public record. Using the new COVID Accountability Library (CAL), it’s possible for any citizen or journalist to fact check the statements of politicians like Biden, Trump and others against a database of more than 100,000 previous public comments on the virus.

“All the way back in the beginning of February, I argued that we should be keeping people in China,” Biden told town hall moderator George Stephanopolous.

But a quick search on CAL finds on February 1, the day after Trump enacted the China travel ban in an effort to slow the spread of coronavirus, Joe Biden tweeted:

“We are in the midst of a crisis with the coronavirus. We need to lead the way with science — not Donald Trump’s record of hysteria, xenophobia, and fear-mongering. He is the worst possible person to lead our country through a global health emergency.”

In mid-March, Biden responded to a Trump tweet bragging about blocking travel from China with the message: “Stop the xenophobic fear-mongering. Be honest. Take responsibility. Do your job.”

Biden did call China out for its behavior “all the way back” in February. “What I would do were I president now? I would not be taking China’s word for it. I would insist that China allow our scientists in to make a hard determination of how it started, where it’s from, how far along it is,” he said during a February 26 Democratic town hall.

But there’s no record of Biden calling for any China travel restrictions.

President Trump’s record is available, too, of course. During a contentious town hall that same night with NBC’s Savannah Guthrie (town hall participants were allowed just ten questions, while Guthrie asked 43), Trump was asked why he dismissed the risk of COVID-19 early on when, according to his conversation with journalist Bob Woodward, he knew it was more dangerous than the flu.

And, in fact, on March 9 President Trump tweeted: “So last year 37,000 Americans died from the common Flu. It averages between 27,000 and 70,000 per year. Nothing is shut down, life & the economy go on. At this moment there are 546 confirmed cases of CoronaVirus, with 22 deaths. Think about that!”

But a month later Trump had changed his tune, telling America, “It’s not the flu. It’s vicious.”

Thursday night, Biden also called out President Trump for not more aggressively using the Defense Production Act, a law that can force private companies to create products the nation needs during an emergency, “to get ventilators and so on,” as Biden put it. A quick search shows Trump did invoke the Act in April, with an interesting result.

Reading the public record shows how the conversation about ventilators changed, from early days of panic and stories of improvised devices to take their place; to September, when the Department of Health and Human Services canceled contracts for new production because the nation’s stockpile was full.

The COVID-19 pandemic is at the center of the debate over who should serve as president for the next four years. Like the virus itself, the statements and policy positions of the candidates have evolved. It’s important to check the record.