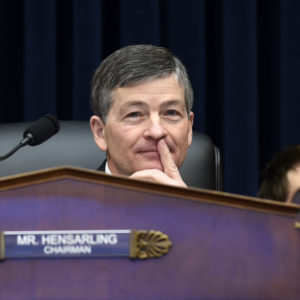 For years Washington has operated under the delusion that government mismanagement played no part in the financial crisis. Convinced that “greedy” Wall Street banks were entirely to blame, the then-Democratic controlled Congress rushed through the massive Dodd-Frank Wall Street Reform and Consumer Protection Act by a largely party-line vote. Their efforts have since proven to be not only ineffective, but economically destructive. Thankfully, Congress now has available a suitable remedy in House Financial Services Chairman Jeb Hensarling’s Financial Choice Act.

While unveiling his reforms in a speech to the Economic Club of New York, the Texas Congressman called Dodd-Frank “a breathtaking, unconstitutional outsourcing of legislative powers to the executive branch.”

He likely had in mind its creation of the Consumer Financial Protection Bureau (CFPB) and the Financial Stability Oversight Council (FSOC), agencies which operate outside the usual political system of checks and balances, but which nevertheless exert tremendous power and control over the economy.

The CFPB has dedicated funding from the Federal Reserve, eliminating the primary tool by which Congress is able to carry out oversight of executive agencies, and its top official cannot be removed. The renegade bureaucracy recently took it upon itself to draft rules that would effectively eliminate an entire industry by rendering small-dollar loans unprofitable. The end result is that millions of Americans who rely on the short loans to help cover unexpected expenses between paychecks will have nowhere legal to turn.

Another misguided provision from Dodd-Frank is the so-called “Durbin Amendment.” The unnecessary intervention into debit card interchange fees enacted price controls on the charges which card issuers collect from merchants for each processed transaction. This was sold as a benefit to consumers, but the end result has been anything but. Research suggests merchant savings have not been passed on, while at the same time many banks have sought to recoup their losses by eliminating free checking accounts, reducing rewards, and raising other fees.

The Volcker Rule banned proprietary trading by banks even though such activity was not connected with any bank collapse during the crisis. It and other mandates have reduced liquidity in the bond market, which amplifies volatility and contributes to instability in the financial sector – the exact opposite of the law’s intention.

As a response to the financial crisis, Dodd-Frank has simply failed to deliver. Instead of addressing root causes – easy money, government mismanagement, conflicting regulatory agendas, bad housing policies, and systemic moral hazards – it has exacerbated many of these problems. Americans are tired of government bailouts, but were given a so-called reform law that has codified too-big-to-fail and bailouts into law.

Hensarling’s reforms would remove failed provisions like the Volcker Rule and the Durbin Amendment, while transforming the CFPB into a bipartisan commission similar to the SEC. It would also enhance penalties for fraud, and institute other reforms designed to increase capital liquidity so that markets can adapt when faced with unexpected events, instead of being bogged down by a costly, overly bureaucratic law.