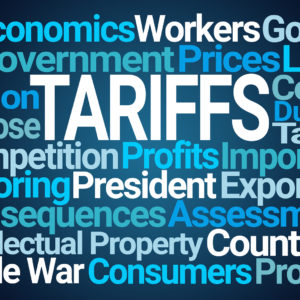 Whenever Trump announces new tariffs, he says, small businesses are likely to stock up on loans or supplies in anticipation of the effect on their supply chains. Following Trump’s announcement last week, QuickBridge saw a “crazy” uptick in small business loan applications on Monday.

“It was off the charts for us,” Gold told InsideSources. “We came off a busy July for us, we’ve been busy in general this year, but yesterday was really, really busy for us. We usually see 400-450 applications a day for financing, and we saw well over 500 yesterday. There could be a number of factors that go into that, Monday is a busy day, but it does seem like there’s got to be some correlation. People are like, whatever that thing was on the back burner I should jump in and do it right now.”

This isn’t always good, Gold said, because many small businesses end up overreacting to the supposed effect of the tariff and taking on too much debt that they can’t repay.

“When the first round of tariffs that happened, we saw a bunch of activity toward the end of last year, and our portfolio did not perform all that great,” Gold said. “A bunch of small businesses tried to buy a bunch of stuff in anticipation of tariffs and maybe overbought or overreacted and that impacted their ability to repay. I hope that’s not the case again where they try to jump out ahead and take on more debt than they should have.”

Compounding the problem is low interest rates, Gold added. Because rates are so low, small businesses are more likely to take out more, bigger loans. Gold advocates for a “wait and see” approach when it comes to tariffs, because America’s trade relationship with China is constantly in flux.

“For a lot of small business owners, you want to be super careful where you’re not putting yourself in a situation where you’re committing a whole bunch,” Gold said. “Because you’ve over-leveraged yourself in anticipation of [tariffs] and it didn’t have the impact you thought it would have, or there’s some kind of slowdown. That’s the challenge. It doesn’t seem like anybody has a clear, concise articulation of what to expect. It doesn’t seem like we’re dealing with a bunch of rational actors in this, it’s always hard to predict what Trump is thinking. I’m also not sure what the endgame is in this. Whatever happens next could be the new normal.”

Most of QuickBridge’s clients are small businesses in the construction or retail industries or are specialty trade contractors. According to QuickBridge’s statistics, 53 percent of their clients see tariffs having “some or a major impact” on their business. Also, 54 percent do not plan to increase their prices due to tariffs, but 30 percent plan to raise prices “slightly.”

“You either eat into the margins or charge your customers higher, and ultimately that will lead to some level of inflation, but we haven’t seen that,” Gold said.

The National Retail Federation, on the other hand, features a variety of statements from small business owners across the country decrying the tariffs and explaining how tariffs will hurt their business.

“As we’ve said repeatedly, we support the administration’s goal of restructuring the U.S.-China trade relationship,” the NRF said in a statement. “But we are disappointed the administration is doubling-down on a flawed tariff strategy that is already slowing U.S. economic growth, creating uncertainty and discouraging investment. The tariffs imposed over the past year haven’t worked, and there’s no evidence another tax increase on American businesses and consumers will yield new results.”

In line with Gold’s comments, the NRF said retail imports are up as retail businesses race to stock up before the next round of tariffs go into effect.

The Tax Cuts and Jobs Act (TCJA) may mitigate the effects of tariffs for some small businesses, depending on which industry and which state they’re in, but not all small businesses saw benefits from the TCJA.

A less pressing problem that could hurt U.S. small businesses in the long run is how tariffs will affect their relationships with overseas suppliers, especially in China. A lot of hard work goes into developing and maintaining healthy relationships with Chinese suppliers, which Gold calls a “giant strategic advantage.” A trade war threatens those relationships.

“The concern is that if you’re a small business owner and have a relationship with a business in China, it is not easy to find those relationships in China, and now it’s all of a sudden going to cost you 20-30 percent more,” Gold said. “You now all of sudden have to think, where do I go? I don’t know if they’ve gotten to that point yet, but that would be my concern. When you find those relationships, it’s great, it’s [often] what launches some of these businesses. I’m hopeful there’s enough resiliency that everybody will be able to figure out some alternatives. So many small business owners are already wearing so many hats, [so] to rethink your supply chain is a lot easier said than done.”

Given how financial activity for small business stabilized last year after the first round of tariffs, Gold said he’s “optimistic” they will be resilient enough to cope with continuing tariff threats. The key will be to not panic.

“A lot of these things take time before we see the real impact of them,” he said. “A lot of people are like, I want to know now, and we may not see it for a year.”