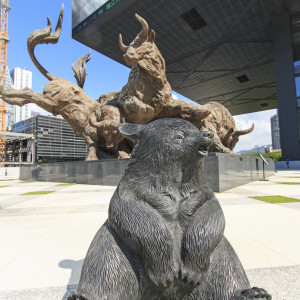 Stock market building in Shenzhen, one of the three stock markets in China.
[IS] Opinions

Judging by U.S. policymakers’ seeming indifference to the emerging market economies in setting economic policy, one might be forgiven for thinking that those economies constitute a small part of the global economy. Yet, according to the International Monetary Fund, the emerging market economies now account for over half of the world economy. At the same time, their governments and their corporations are hugely indebted to the global financial system as they have never been before.

This has to make one think that the administration and the Federal Reserve are ignoring at their peril the adverse effect of monetary, fiscal and trade policies on the emerging market economies. This is particularly the case at a time when all too many of these larger economies like Argentina, Brazil, China, South Africa and Turkey face daunting economic challenges and considerable political uncertainty.

Should those economies falter as a result of U.S. policies, given their combined size, they could materially impact both the U.S. and the world’s economic and financial systems.

According to a Wall Street adage, when the winds are strong, even turkeys fly. By this is meant that when money is easily available in the global financial market, even borrowers with the weakest of economic fundamentals can borrow and thrive. However, once that liquidity dries up, the weakest borrowers come crashing down as they face difficulty in financing their deficits and in rolling over their debt.

This adage might have particular relevance for today’s emerging market economic outlook. This would seem to be particularly the case at a time when many years of ultra-easy global liquidity conditions are coming to an end and when those easy money conditions lulled emerging market policymakers to be very much less disciplined in their economic policies at home.

During the years when the world’s major central banks maintained extraordinarily low interest rates and expanded the combined size of their balance sheets by $10 trillion, the emerging market economies had little difficulty in tapping the international capital market.

Indeed, between 2008 and 2017, emerging market companies managed to increase their borrowing by $15 trillion. In the process, they more than doubled their overall indebtedness to a staggering $25 trillion. And they did so at very low interest rates that did not nearly compensate investors for the default risk associated with that borrowing.

Equally striking is the fact that last year, when global liquidity was still unusually ample, a country with as checkered a default record as Argentina could issue a 100-year bond on relatively favorable terms. Similarly, eyebrows might be raised by the fact that global investors eagerly snapped up sovereign bond issues by countries with as dubious economic and political fundamentals as Iraq, Kenya, Mongolia and Tajikistan.

Sadly, for the emerging market economies the strong winds of very easy global liquidity conditions are now rapidly dying. The Federal Reserve is now well on its way to normalizing interest rates and to reducing the size of its balance sheet. At the same time, the European Central Bank has announced that it will stop its quantitative easing program by year’s end.

Further clouding the emerging market outlook is the pursuit of an expansive fiscal policy by the Trump administration at this late stage in the U.S. economic cycle. By putting upward pressure on U.S. interest rates and the dollar, that fiscal policy reinforces the capital flow reversal from the emerging markets already being induced by the more attractive interest now on offer on U.S. Treasury issues.

The last thing that the emerging market economies now need is a slowing in the Chinese economy and a depreciation of its currency. Not only would that crimp demand for international commodities, which is the lifeblood of many emerging-market economies. It would also heighten the risk that China and the United States would drift further toward a full-scale trade and currency war that might derail the global economic recovery.

Yet, it is difficult to see how China can succeed in avoiding a slowing in its economy and a weakening in its currency as it tries to address its own domestic credit bubble of epic proportions. This would seem to be especially the case at a time when its economy is also being adversely affected by a very much more restrictive U.S. trade policy.

It is hoped the recent large movements in the currencies of Argentina, Brazil, China, South Africa and Turkey will alert policymakers to the fragility of the emerging market economies and to their importance for the U.S. economic outlook.