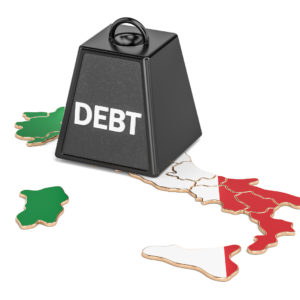 Italy’s Debt Is Worse Than You Think

Since June when the new Italian government took office, the market has begun to focus again on that country’s shaky public debt fundamentals. The market would seem to be more than justified in doing so. Not only have Italy’s economic growth prospects been diminished by the coming into office of a populist government sorely lacking in commitment to either budget discipline or economic reform. Rather it is also that the country’s present public debt level has not looked more troubling than it has over the past 100 years.

The market’s unease about Italy’s public debt level has been reflected both in a sharp rise in Italian bond yields and a loss in foreign appetite for the country’s public debt. Since the start of the year, Italian 10-year bond yields have approximately doubled to their present level of 3.15 percent, which is the highest level recorded since mid-2014. Over the last two months foreigners have been reducing their Italian government bond holding at a monthly rate of around 40 billion euros.

Sadly, markets would seem to have every reason to be concerned about Italy’s public debt mountain. This is particularly the case at a time that the Federal Reserve has begun to raise interest rates and the European Central Bank has indicated that it intends to end its bond buying program by the end of 2018. According to official data, since the depth of the Eurozone debt crisis in 2012 Italy’s public-debt-to-GDP ratio has continued to rise to its present level of 132 percent of GDP. This makes the country the Eurozone’s second most indebted country after Greece.

Troubling as a 130 percent public-debt-to-GDP ratio might be, there are two reasons to think that the official debt figures understate the seriousness of Italy’s public debt problem. The first is that Italy’s official debt statistics exclude the Bank of Italy’s approximately 400 billion euros debtor position in the European Central Bank’s Target 2 clearance mechanism. Including the Bank of Italy’s Target 2 liabilities would take the country’s public-debt-to-GDP ratio to around 160 percent, or to the highest in the last 100 years.

A second reason for thinking that Italy’s official public-debt figures might be understated is that it is all too likely that Italy’s troubled banking system will at some stage need a government bailout. Not only does the Italian banking system have more than 10 percent of its loan portfolio in non-performing loans. It also holds more than 400 billion euros in Italian government bonds, which constitutes a dangerous doom-loop between the banks and the government.

To be sure, a country can always bring down its public debt to a more manageable level by a combination of increased budget discipline and economic reforms to put the country on a higher economic growth path. However, the new Five Star Movement-Italian League coalition government would appear to be moving in exactly the opposite direction to that which is required to achieve such a reduction in the public-debt ratio.

For a start, the new government would seem to be flouting the Eurozone’s rules for disciplined budget policies. It is doing so by insisting both on increasing public spending to finance a minimum income support program and on reducing tax revenues by the introduction of a flat income tax.

At the same time, far from introducing market friendly economic reforms, the new government seems to be intent on rolling back the labor market and pension reforms of its predecessor. This has to raise a basic question. If the Italian economy could not grow rapidly in a favorable global liquidity environment with a reform-minded government, why would one expect it to grow rapidly in a more difficult global liquidity environment with a government in the process of rolling back economic reforms?

All of this has to raise the possibility that Italy is headed for another sovereign debt crisis. This would certainly not be good for the global economy since Italy’s economy is around 10 times the size of that of Greece and after the United States and Japan it is the world’s third-largest sovereign debt market. For which reason, one has to hope that the new Italian government heeds the warnings that it is already getting from the markets and moves rapidly in the direction of budget discipline and economic reform.