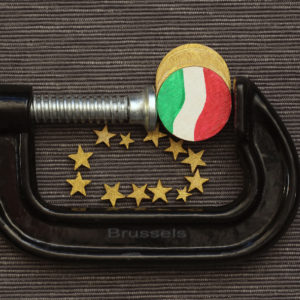 Italy’s Threat to the Euro

Six years after the Euro crisis was supposed to have ended, ill winds of political change are now blowing in Rome and Berlin. They are doing so at a time that Italy, the Eurozone’s third largest economy, is coming under increased market pressure fueled by doubts about the country’s economic outlook and the sustainability of its public finances. This has to once again raise questions as to whether the Euro can survive in its present form.

In March 2018, in large measure in response to two decades of literally no increase in Italian living standards and growing opposition to Europe’s immigration policy, the Italian electorate abandoned the country’s established political parties. That election paved the way for the formation in June 2018 of a populist government comprised of the strange bedfellows of the far-left Five-Star-Movement and the far-right Italian League.

A unifying characteristic of the new Italian coalition government is its open defiance of the Eurozone’s rules especially in the area of budget and immigration policy.

Whereas the European Commission is insisting that Italy’s excessively high public debt to GDP ratio and its shaky banking system require that it limit its 2019 budget deficit to ¾ percent of GDP, the Italian government is proposing a budget deficit of 2 ½ percent of GDP. It is doing so to make good both on the Five-Star-Movement’s campaign promise to introduce a basic income support program and on The League’s campaign promise to introduce a flat tax.

Since the trouncing of both the Christian Democratic Union and the Social Democrats in the recent Bavarian regional election, the days of Germany’s Grand Coalition government and of Angela Merkel’s Chancellorship would appear to be numbered. It is also all too likely that the next German coalition government will be less European-friendly than the present one is and that the Christian Democratic Union will shift right to fend off a challenge from the far-right Alternative for Germany Party.

Especially at a time that the global liquidity cycle is becoming more restrictive, the Italian government would seem to be playing with fire in its budget standoff with Europe. This would seem to be underlined by the fact that since the March 2018 election, Italian government bond yields have already doubled to 3 ½ percent while the Italian economy has ground to a halt.

There is the real danger that if the Italian government makes no effort to reduce its excessively high public debt level, markets could require yet higher Italian government bond yields. That would risk tipping the Italian economy into a downward spiral. It would do so by inducing yet another Italian economic recession, which would only further compromise its weak public finances and its shaky banking system. That in turn would most likely provoke yet another round of bond selling.

The changed German political landscape will also make it difficult for the European Central bank to once again ride to Italy’s rescue as it did in 2012 should Italy indeed experience a full blown financial crisis. This would seem to be especially the case considering that Italy’s current headstrong populist government commands a parliamentary majority. That makes it difficult to dislodge in favor of a technocratic government that is prepared to play by Europe’s rules as occurred in 2011 with the Berlusconi government.

Hopefully, US policymakers are paying close attention to European political economic developments and will refrain from indulging in schadenfreude about Europe’s plight. This is especially the case since the unraveling of the Euro, coupled with a European banking crisis that would almost certainly follow such an event, must be expected to have major spillover effects to the global economy and to the world financial system. It would do so in much the same as the US Lehman bankruptcy did in 2008.