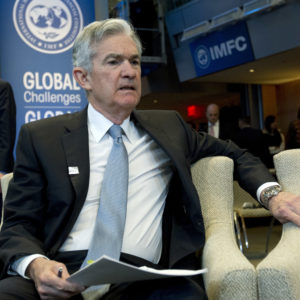 Jerome Powell and the Emerging Markets

Federal Reserve Chairman Jerome Powell seems to be whistling in the wind about the emerging market economies. At the very time that these economies are experiencing large declines in their currencies and in their stock and bond prices, Powell is reassuring us in prepared remarks in Zurich that the normalization of monetary policies in the advanced countries should prove to be manageable for the emerging markets.

Powell’s recent speech very likely implies that the Fed is not particularly concerned about the effect of its monetary policy tightening on the emerging market economies.

If this is indeed the case, those economies should brace themselves for some rough sledding in the months ahead as the Fed is forced to take additional action to prevent the U.S. economy from overheating. This would seem to be particularly the case in the context of already rising U.S. inflation expectations and an expansionary fiscal policy at this late stage in the economic cycle.

One reason for thinking that Powell is overly sanguine in his assessment of the emerging market economies is their currently very high level of indebtedness. As the IMF recently noted, today’s sovereign debt levels in relation to GDP in those economies are higher than they were at their pre-2008 crisis peak. Compounding matters, emerging market corporate debt to GDP levels have now risen to all-time highs on the back of a $15 trillion increase in that debt over the last eight years.

It would seem that Powell is also overlooking how low emerging market debt yields currently are and how compressed their debt spreads in relation to U.S. Treasuries have become. This is all the more surprising considering that it was an explicit policy objective of the Fed’s quantitative easing program to have investors take on more risk in response to the Fed’s forcing down long-dated U.S. Treasury rates by its large scale bond purchases.

As part of their stretch for yield, investors have bid up emerging market bonds and stocks to very rich levels. This makes those economies all the more vulnerable to a sudden stop in capital flows from abroad as U.S. interest rates continue to rise from their recent all-time lows. Why expose oneself to risk in the emerging markets, for which one is not being adequately compensated by high interest rates, when one can once again earn a safe 3 percent on long-dated U.S. Treasuries?

Past experience would also suggest that a rising U.S. dollar is generally associated with a more challenging capital market environment for the emerging market economies. In the months ahead, this could be a real problem for those economies should the dollar continue to rise as a result of additional Fed tightening at a time that both the Bank of Japan and the European Central Bank are likely to maintain an ultra-easy monetary policy stance.

Yet another reason for thinking that Powell is likely incorrect in supposing that the emerging market economies will weather well the Fed’s normalization of monetary policy is the shaky economic and political fundamentals of those countries.

It is not simply that important emerging market economies like Argentina and Turkey have large economic imbalances that are sending their currencies into a free fall. Rather it is that a country like Mexico could see a major change for the worse in the direction of its economic policies following its July presidential election, or that a country like Brazil will find it difficult to address its serious budget deficit problem in the run-up to its October presidential election. Not to mention that a highly leveraged Chinese economy could take a serious blow if its trade tensions with the United States were to increase.

For which reason, one has to hope that Powell is proved right to be relaxed about the emerging market economies. One has to do so even though all the clues would seem to be pointing in the opposite direction.