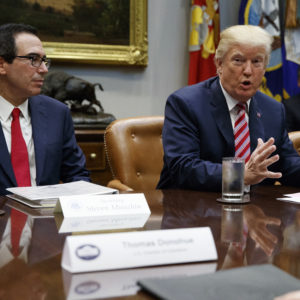 Treasury Secretary Steve Mnuchin listens as President Donald Trump speaks during a meeting on tax policy with business leaders in the Roosevelt Room of the White House, Tuesday, Oct. 31, 2017, in Washington. (AP Photo/Evan Vucci)
[IS] Opinions

The Jury Is Still Out on Trumponomics

In 1972, almost 200 years after the French Revolution, Chinese Premier Zhou Enlai is supposed to have said that it was still too early to draw definitive conclusions about that revolution. One has to wonder whether the same might not be said about an economic assessment of Donald Trump’s first year in office.

While the short-term results of his administration’s economic policies certainly appear to have been positive, it remains to be seen what the longer run economic consequences of those policies will be.

Supporters of President Trump’s economic policies argue that the successful passage of the recent tax cuts, together with the substantial rolling back of burdensome economic regulations, have already got the U.S. economy onto a better track. In particular, they note that since Trump assumed the presidency, the stock market has appreciated by 25 percent, unemployment has declined to a decade-long low, and the pace of U.S. economic growth has picked up to around 3 percent.

In trumpeting these gains as evidence of Trump’s sound economic stewardship, Trump supporters choose to ignore the fact that in President Barack Obama’s first year in office the stock market rebounded by 35 percent while in his eight years in office, the stock market approximately tripled. Nor do they acknowledge that the rate of job growth during Trump’s first year as president has been no faster than the average rate of job growth during the Obama years.

Similarly, Trump supporters turn a blind eye to the fact that during Trump’s first year in the presidency, the European and Japanese stock markets and economies did as well as if not better than did those of the United States. They also choose to downplay the fact that over the past year the U.S. dollar has managed to lose almost 10 percent of its value. These facts suggest that the impressive U.S. stock market and economic performance in 2017 might have had more to do with ultra-easy monetary policies of the world’s major central banks rather than with the change of U.S. administration.

A more troubling reason to question how good Trump’s economic stewardship has been relates to his unfunded tax cut, which has been his main economic policy initiative to date. According to the bipartisan Congressional Budget Office, over the next 10 years this tax cut is likely to add $1.5 trillion to the U.S. public debt. It is also estimated that the bulk of the gains from this tax cut are to be enjoyed by those in the highest income tax brackets.

Leaving aside the socially and politically important questions of equity that the tax cut raises, one has to ask how much sense an unfunded tax cut makes at this stage in the U.S. economic cycle. The basic principles of sound public finance dictate that in the good economic times, when the economy is humming along well and unemployment is low, one should make every effort to reduce the public deficit.

There are also reasons to fear that by complicating the Federal Reserve’s task of normalizing interest rates, the tax cut could seriously affect U.S. economic performance in the year immediately ahead and contribute to a widening in the U.S. trade deficit. With frothy global asset price markets, the last thing that the Fed needs is a fiscal boost that might force the Fed to raise interest rates at a faster pace than it otherwise might have done in order to avoid inflation.

Yet another cloud hanging over the longer-run U.S. and global economic outlooks is the president’s adherence to his America First trade policy and his seeming disdain for international economic policy cooperation. Not only has the president pulled the United States out of the Trans-Pacific Partnership and refused to sign up to the G-20 pledge to avoid increased protectionist policies but he is also now threatening to pull the United States out of the North Atlantic Free Trade Association and he appears to be gearing up for a trade war with China. There is every reason to think that such action could prove to be economically very disruptive.

It is hoped this time will be different and unsound economic policies will not spell trouble for the longer-run U.S. and global economic outlooks. However, I will not be holding my breath since all the clues from previous episodes of economic mismanagement would seem to point in the opposite direction.