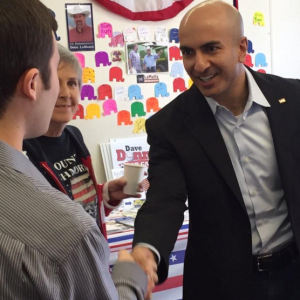 Neel Kashkari campaigns for Governor of California in 2014.
News

Neel Kashkari, the president of the Federal Reserve Bank of Minneapolis, spent the past 24 hours ginning up the debate over the mega-banks that are “too big to fail” — the ones the government would have to bail out or risk crashing the American economy.

There was a symposium of leading academics, a meeting with journalists and an open house with the citizens of the Twin Cities. The conference proved more lively than most gatherings about financial regulation and the meeting with the press surprisingly unscripted. The public meeting may have been a first for the Federal Reserve System.

Privately, no question was more often put in Minneapolis than the disbelieving query of why Kashkari has decided to take on the big banks. Is he really sincere? After all, he is a made man of Wall Street — a place that doesn’t exactly churn out turncoats. He’s a former executive of Goldman Sachs who followed a mentor, CEO Hank Paulson, into the George W. Bush administration. Meeting with the citizenry, Kashkari even owned up one of the least popular acts in American history: “To put a finer point on it: I’m the guy who bailed out the banks.”

With that track record Kashkari can only demonstrate his bona fides with deeds, not words. He’s promised a high-profile public debate, and policy recommendations by the end of the year. Kashkari may not be a card-carrying acolyte of the financial reformers who have  gained traction in Washington in the last 5 years. But he’s cut himself loose from the bank lobby — a group that doesn’t easily forgive. Kashkari arrived in Minneapolis with a mission, and burned the bridges leading east to Wall Street.

Kashkari has a talent for breaking down complex issues that are mind-numbing when discussed by academics, and in the too-big-to-fail debate he has taken on one with a ferocious populist appeal. In the hands of academics, TBTF, as it’s known, is about forcing banks to build up greater loss-absorbing buffers or breaking them up into component parts so that failure doesn’t threaten the financial system and force the government to bail them out.

In the hands of Kashkari and other reformers, TBTF is implicitly a fairness issue: big banks have a safety net the rest of us don’t; we can lose houses and jobs if things go south. The bankers get to keep their companies and their bonuses.

Kashkari doesn’t burn with the kind of indignation that animates people like Senator Elizabeth Warren, the progressive firebrand from Massachusetts who is the de facto leader of Wall Street’s critics in this country. But his composure shows signs of wilting when he discusses the 2008 bank bailout, when the U.S. government put up $700 billion to ensure the banking system would not fail. “In the worst moments of the crisis,” Kashkari told the public, “I didn’t think we’d get one dollar back.” Clearly, it was a searing experience.

For the moment, Kashkari has more in common with the bully-pulpiteering financial reformers like Warren or Benjamin Lawsky, the former superintendent of financial services in New York, or Richard Cordray, the head of the Consumer Financial Protection Bureau. They speak out freely and forcefully, Warren to the point of bringing financial regulation into popular culture. Kashkari will convene two more conferences in the coming months, and deliver more speeches, and probably hold more public meetings. Maybe he’ll even show up on The Daily Show, as Warren has.

Unlike Warren, Kashkari didn’t actively demonize large banks like Citigroup or JPMorgan Chase by name, but he did call out their trade associations for criticizing his work while declining invitations to speak at the conference. He called the heads of the Financial Services Forum, the Financial Services Roundtable and the Institute of International Finance. All of them, he said, took a pass, even as they issued statements criticizing his plan. “I’m glad they are taking this seriously,” Kashkari told reporters. “They are scared.”

The differences within the Federal Reserve System were something Kashkari didn’t even try to paper over. His colleagues have a “diversity of opinions” on the matter, Kashkari said to abundant laughter in the room. “Not everybody agrees with me,” he added. Convincing other Fed officials that his effort is not simply The Neel Kashkari Show may provide one of his tougher tasks.

For now there is no reason to doubt Kashkari when he says he wants to “drive a sustained national conversation” about how the country can ensure that the government never has to bail out banks again. One of the surprises of the last 5 years has been that, 5 years on from Dodd-Frank, the country is still debating financial reform and the $700 billion that the government put up in 2008.

But Kashkari is probably right in one respect: “We have a narrow window of time while we still remember how brutal that time was, before we move on and forget.” It’s a problem Kashkari surely understands intuitively, because the former Goldman Sachs man has limited time and space to prove he is serious — and sincere.