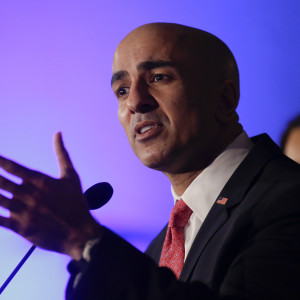 MINNEAPOLIS — To say that bankers here were shocked when Neel Kashkari landed the job of president of the Minneapolis Federal Reserve Bank does not do the reaction justice. A former Goldman Sachs executive who helped design the 2008 bank bailout before running for governor in California seemed a quirky fit for a region filled with stolid Midwesterners.

And that was before Kashkari did Minnesota and the rest of the country one better with a full-throated denunciation of the largest U.S. banks for being so large and complex that their collapse would still threaten the global financial system. Now, Kashkari says, the question is what to do about it — a question major banks figured had been settled in 2010, when Congress declined to break them up.

“I was as surprised as anyone at the announcement,” said Noah Wilcox, head of Grand Rapids State Bank, based in northern Minnesota, and a frequent sounding board for the Fed. “It was totally out of left field. It was something I had never, ever considered.”

The conversion of Kashkari to the cause of “too big to fail” — the debate even has its own abbreviation, TBTF — has elicited cautious murmurs of approval from those suspicious of the former Goldmanite’s true intentions in openly challenging the likes of JPMorgan Chase, Citigroup, Bank of America and even his former employer. Another critic of Wall Street is a welcome addition to their ranks.

“I’m not prepared to push back on the idea that Kashkari has other motivations,” said Bartlett Naylor, a shareholder activist with the liberal advocacy group Public Citizen. “But I like it when people like them show up to work and want to make a splash. Banking runs amok when regulators are placid.”

Today, Kashkari will have a chance to make some more waves. The Minneapolis Fed is hosting the first of a series of symposiums that Kashkari says will result in a report to Congress about the next steps in preventing bank bailouts.

Kashkari’s maiden speech on Feb. 16 at the Brookings Institution in Washington acknowledged the progress regulators have made in ensuring that a major bank could fail without threatening the entire financial system by forcing them to hold more loss-absorbing capital and requiring them to map out in advance their own dismemberment, if it came to that.

But he openly questioned whether the largest banks needed to be broken up into smaller entities, or required to hold so much loss-absorbing capital — shareholder equity, that is — that it would be impossible for them to fail. The latter step would also drastically reduce the profitability of the banks.

The populist themes embedded in those solutions suggest Kashkari’s further ambitions and sensible policy aren’t mutually exclusive. He might not get a senior post in a Hillary Clinton administration, but the odds of an appointment under a future Republican president — Kashkari is 42 years old — have probably risen.

“He is making some serious arguments, for sure,” said David Wessel, director of the Hutchins Center on Fiscal and Monetary Policy at the Brookings Institution. “But if he spends five years at the Minneapolis Fed, he’s a candidate for a future Republican administration — and he is scrubbed of the taint of the bailout and Goldman Sachs.”

The proof of Kashkari’s sincerity may be in whether he can deliver well-researched policy prescriptions that find their way into speeches by other senior officials in the Federal Reserve System, or whether Kashkari can persuade Congress, which can barely agree to keep the original 2010 financial reform intact, to take seriously some of those suggestions.

So far, there is more than a strong whiff of public relations around what Kashkari is doing in his new billet.

Records of Kashkari’s appointments show he’d hired Weber Shandwick, a large PR firm, to assist with media training before the rollout of his Washington speech. In the two weeks after, Kashkari gave at least 13 media interviews going over the same material. His staff made some initial forays onto Capitol Hill.

Wilcox, the Minnesota banker, said his initial soundings of the Fed staff have reinforced the impression that Kashkari has a keen interest in getting his name out there. “If there’s a theme running through those discussions it’s that: He is going to be heard,” Wilcox said. “He has not been shy about getting in the limelight.”

The Minneapolis Fed, which mixes representation of bankers, industrial companies, labor and philanthropy on its nine-member board, didn’t get advance word of Kashkari’s plans to take on the too-big-to-fail issue, according to a person informed by its deliberations.

But it didn’t object either.

“Regional bank presidents have strong incentives to make a splash, and their boards of directors encourage that,” Wessel said.

The Minneapolis Fed president’s main tool is the bully pulpit. Fed supervisors directly scrutinize the books of some banks in their region, and Kashkari will join the interest rate-setting body on a rotating basis. But that will leave him plenty of time to engage the too-big-to-fail debate.

And he has a certain amount of history to work with. Gary Stern, who ran the Minneapolis fed from 1985 to 2009, co-authored a book published in 2004 questioning the wisdom of bank bailouts.

Kashkari may have a long road ahead in winning the trust some of the more prominent voices in the financial reform debate, in particular Sen. Elizabeth Warren, the Massachusetts Democrat who came to Washington to chair the board that oversaw the bank bailout. Now, she’s the leader of the party’s liberal wing on financial regulation.

In her book, “A Fighting Chance,” Warren recalled a meeting with Kashkari after about $170 billion of the $700 billion in bailout funds had been committed to major U.S. banks. The big cash injections, Kashkari told Warren and several other members of the oversight board, were done. Now it was time to focus on getting assistance to smaller banks.

Two days later, Treasury poured another $20 billion into Citigroup, atop the $25 billion it already had, and gave it a taxpayer guarantee worth over $300 billion.

“I was stunned — and furious,” Warren wrote. “Our panel hadn’t even had our first organizational meeting, but whatever vision I’d had of cooperation and candor had vanished.”

As a gubernatorial candidate in California in 2014, Kashkari denied Warren’s assertion. As president of the Minneapolis Fed, he will need his onetime antagonist from Massachusetts if any of his ideas for change are to become reality.