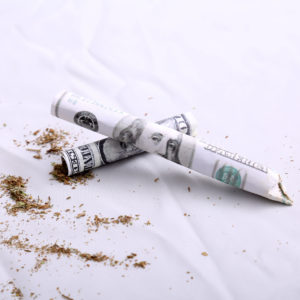 Cannabis is quickly becoming big business. Last year, retail sales in the states which have voted to legalize the drug totaled more than $6.5 billion. More than a quarter of Americans now live in areas which allow some form of legal cannabis for either medical or recreational use. Despite the growing acceptance of marijuana use, the legal cannabis industry still faces a number of legislative hurdles at the federal level, especially when it comes to financing.

“No banks want to touch cannabis money in California,” says Serge Chistov, financial advisor for a Colorado-based cannabis cultivation group. “This is a multi-billion dollar industry running in cash.”

Last fall, California became the most populous state to vote to legalize recreational use of cannabis. Even as public acceptance of recreational marijuana use increases, the drug remains illegal under federal law. As a result, growers and suppliers in states that have voted for legalization find it difficult to expand their operations. In places like Colorado and California, growers and dispensaries operate in a sort of legal limbo, where their sales are regulated and taxed under state law, while remaining illegal under federal law.

As a result, these businesses are barred from accessing many of the banking services that companies rely on every day, including basics like loans and deposits.

“Right now, politicians don’t want to change federal marijuana laws and deny access to banks even for industrial uses,” says Chistov, who characterizes current drug policy as “shameful.” Chistov stresses that, with regards to marijuana, the problem lies with federal regulations, not state laws. As long as marijuana remains a controlled substance, banks insured by the FDIC must disclose any transactions related to its sale to federal regulators. This could result in additional regulatory scrutiny for the bank or financial institution.

As a result, most of the largest banks in the U.S. are avoiding any dealings with the legal cannabis industry. Yet, as the size of the market grows, smaller financial institutions are finding the new market hard to pass up.

“Banks are either afraid of the feds, or they don’t want to ruffle feathers,” says Chistov. “Even with the federal legislation, there are some banks willing to do extra leg work to work with business, just because of how much money there is.”

Despite the legalization votes, so far, no large banks have decided to wade into the legal cannabis industry, which requires additional legwork on their part and could subject them to additional scrutiny from federal lawmakers. Still, Chistov stresses that an opportunity exists for those banks willing to put in the extra effort to work with cannabis businesses. Often, this involves additional record-keeping and paperwork. Even so, several area banks, including the National Bank of Colorado, the Partner Colorado Credit Union, and Verus Bank, have opted to take advantage of this new business opportunity.

The lack of banking options limits the access that many marijuana companies have to financing. This reality is exacerbated by the fact that most companies in the legal cannabis industry are not publicly traded, which blocks off another potential source of financing. At present, publicly traded marijuana companies are primarily those peripherally involved with growing, including companies that provide marketing and advertising, agricultural technology, and business intelligence to the industry.

Thus far, no companies working to directly grow marijuana are publicly traded. This reflects another difficulty of doing business in an industry which is primarily regulated by state laws. In Colorado, state laws allow cultivation only by in-state owners.

“The state wants to keep track of owners,” says Chistov. As a result, expansion in the industry is again stymied.

This has the potential to backfire on the state, however. Like alcohol, cannabis is heavily taxed. Last year, marijuana tax revenues in Colorado were nearly $200 million and are only expected to increase over time. Requirements that growers or retailers be state residents would restrict the growth of the industry and lower potential tax revenues.

This should come as encouraging news for the nascent cannabis industry. Last year, California wine was a $34.1 billion industry, making the comparison an encouraging one for cannabis growers. Chistov says that, as with wine, cannabis consumers are less brand loyal and instead want to try many varieties of the produce to see how they differ from each other.

Still, key differences between alcohol and cannabis remain. For Chistov, who continues to deal in alcohol as well, importing vodka from Moldova, the growth of the legal cannabis industry exposes the social pressures it continues to face.

“Stigma is a key difference,” he says. “Alcohol is very socially acceptable, despite millions struggling with addiction. Cannabis retains a stigma.”

For the moment, this remains the case. Whether it remains so in the future is yet to be seen.