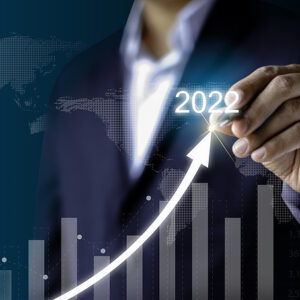 Markets in 2022? Expect Inflation and Growth to Continue, Experts Say

The economy and stock market will continue to grow in 2022 but will feel the effects of inflation, money managers and advisors say.

“High inflation should persist longer than expected,” according to the Capital Group’s 2022 outlook. “Inflation levels should remain elevated through late 2022, fueled by labor shortages and broken supply chains.”

A warning sign that inflation will linger, experts say, is the productivity of American workers. Higher productivity tends to improve the supply side of the ledger and drive prices down.

“There have been periods of improving and deteriorating productivity during the last 60 years, but the overall trend in U.S. output per hour hasn’t secularly changed,” warns Richard Bernstein Advisors in a year-end report.

“Perhaps most revealing, productivity has marginally decreased since the Technology Bubble in 1999/2000 despite the widespread use of the internet and cellular communications. The slight improvement in the last five years has so far not been powerful enough to offset inflationary forces,” according to Bernstein.

Goldman Sachs predicts U.S. GDP growth to be about four percent — a bit behind the projected global average — and the stock market to climb. However, Goldman Sachs also sees the looming specter of inflation and says the Federal Reserve will start targeting it sooner than expected in 2022.

The S&P was up for the year by around 25 percent in late December. That’s an unusually good return since the annual long-term stock market return is some 9.5 percent.

But an overheating economy, as measured by high inflation rates, can wreck stock markets and economies as shown by the disastrous 1970s stagflation.

Not everyone is ready to panic over higher prices, however.

“The U.S. equity market continues to grow despite the ongoing presence of COVID restrictions and supply chain issues,” says Bart Brewer, an advisor in Valencia, Calif.

But Brewer adds “a day of reckoning is probably coming regarding the U.S. economy with China. As the world awakens to their human rights abuses and increasing perceptions of a totalitarian state, first-world economies are going to have to decide how much they will go along with for the sake of inexpensive goods in their countries and corporate profits from the Chinese market.”

Leon C. LaBrecque, a Troy, Mich. advisor, says inflation will be both “sticky and slippery.” He cautions continued high inflation could lead to overpriced stocks.

And Mike Casey, an advisor in Alexandria, Va., says while fundamentally the economy is still strong, “inflation has created a headwind that has pushed up asset and commodity prices.”

Casey adds inflation may decline a bit in 2022. “But I’m afraid the new higher prices may be here to stay for a while.”

In its outlook, Charles Schwab & Co. warns investors could be getting carried away by an unusually good stock market.

“Adding salt to that potential wound is the fact that U.S. households currently have more than 60 percent exposure to equities—about even with the prior peak in 2000,” according to Schwab.

“It shouldn’t come as a surprise that the higher the equity allocation historically, the lower the subsequent long-term return,” Schwab said. “This doesn’t necessarily suggest impending doom for equities next year, but it’s a cautionary tale longer-term.”