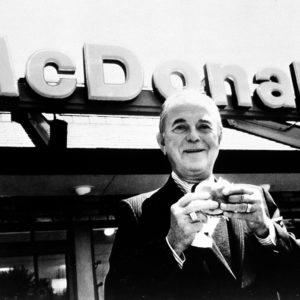 Ray A. Kroc, founder of McDonald's Corporation, is shown holding a hamburger in front of a McDonald's restaurant at an unknown location in this undated photo. In 1955 Kroc, who was a 52-year-old milkshake machine salesman, acquired franchising rights to a small California based hamburger restaurant chain. In 1961, he bought out the McDonald brothers for $2.7 million. (AP Photo)
[IS] Opinions

In 1834, Commodore Uriah Levy bought Thomas Jefferson’s Monticello for $2,700. In the 1880s, the Harmony Borax Works paid Chinese immigrants $1.30 per day to mine borax in the often-brutal heat of Death Valley, California. In 1961, Ray Kroc strong-armed Mac and Dick McDonald into selling their restaurant chain, later worth billions, for $2.7 million.

The emotions these isolated facts elicit are likely off-kilter, thanks to the difficulty of translating one era’s dollars into our own. Our perceptions are distorted by massive decreases in the dollar’s value and by large increases in standards of living. The effect is to generate unjustified narratives of villains and victims.

The real messages of those three factoids are: Commodore Levy paid lots for a dilapidated, not-very-old celebrity house. The borax workers received pretty high wages for grueling work, earning well above what many Americans received at the time. And Ray Kroc paid a small fortune to a couple of guys with a hamburger stand.

$2,700 for Monticello seems astonishingly low in 2018 eyes. But in 1834, a dollar bought perhaps 25 times what it does today, making the purchase price around $67,500 in our dollars. That still seems low, but consider other factors. A disputed title made it unclear as to how much land came with the house. Property was cheap back then, since land was plentiful and Americans weren’t. Monticello was only 62 years old, with construction only finished around 23 years earlier. Jefferson neglected upkeep, as did the owners after he died, so Levy got a money pit of a fixer-upper. Also, Jefferson wasn’t an icon from antiquity in 1834. Ronald Reagan’s presidency and death are more historically remote from us now than Jefferson’s were to Levy then.

Levy’s purchase pleased him greatly, but it wasn’t the deal of the century.

Recently, I visited the Harmony Borax Works in Death Valley — the famous twenty-mule team company. A sign mentioned that in the 1880s, Harmony paid Chinese immigrants $1.30 per day to scrape borax from the hard soil with shovels. Two other tourists read this, and one commented how terrible it must have been to work so hard in such harsh conditions for so little money. An economist’s fiercest temptation is the urge to give impromptu lectures to unsuspecting strangers, and so I did.

I have no idea how many days borax miners worked each year, but it wouldn’t surprise me to learn that it was at least 300 days. If so, the income would be close to $10,000 per year in today’s money. Even half that would put the miners well above many other unskilled workers’ annual incomes. The sum would have been astronomical compared to wages in China, where per capita GDP was only around $40 per year — $1,000 per year in 2018 dollars.

I’ll add an important caveat. Harmony apparently deducted housing and food costs from the $1.30, so after deductions, take-home pay may have been quite low. But the $1.30 figure by itself isn’t a sad story in those times.

Finally, there’s McDonald’s. Ray Kroc’s battles with the McDonald brothers was the subject of the 2016 film “The Founder.” After a tense seven-year relationship, Kroc bought the company from the brothers for $2.7 million. The company was eventually worth billions, and for many, the movie’s takeaway was that Kroc practically robbed the McDonalds.

But in 1961, McDonald’s wasn’t yet worth billions, and it wasn’t clear it ever would be. The $2.7 million purchase price is equivalent to $22.5 million in today’s money. The McDonald brothers were inventive geniuses but seemed to have neither the ability nor the drive to build the international empire that Kroc constructed. For two small-town owners of a really good hamburger stand, it’s hard to imagine any other path that would have brought them checks for $22.5 million.

Moral of the story: Do the inflation math right, and things might not seem so bad.