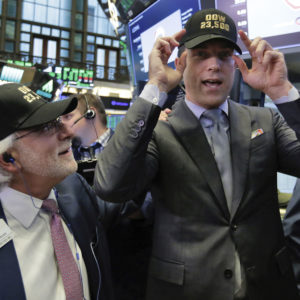 FILE - In this Wednesday, Nov. 1, 2017, file photo, trader Peter Tuchman, left, and New York Stock Exchange President Tom Farley don caps marking "Dow 23,500," on the trading floor as the index crosses the milestone. The stock market may have appeared to Donald Trump as “a big bubble” before he was elected, but he’s had plenty of reasons to tout Wall Street’s gains as president. In the year since Trump’s election, the Standard & Poor’s 500 index has notched at least 60 record highs and risen 21.1 percent. (AP Photo/Richard Drew, File)
[IS] Opinions

In late 2008, in the immediate aftermath of the Lehman Brothers bankruptcy, Queen Elizabeth famously asked a group of academics why no one had warned her about the global economic crisis that was triggered by that bankruptcy.

Judging by today’s seeming complacency in policymaking and academic circles about the world economic outlook, one has to wonder whether by this time next year Queen Elizabeth might be asking not only why she was not warned about another global economic crisis but also why so little seems to have been learned from the previous boom-bust cycle.

An indication of policymaker complacency is the repeated upward revisions in the IMF and the Organisation for Economic Co-operation and Development’s 2018-2019 global economic growth forecasts. These revisions are made despite the fact that global debt levels today are around 30 percent of GDP higher than they were on the eve of the 2008-2009 Great Economic Recession. They are also made despite the fact that today’s mispricing in global asset and credit markets is much more pronounced than it was in 2008.

Whereas in 2008, asset price bubbles were largely confined to the U.S. housing and credit markets, today those bubbles would seem to be very much more pervasive. Not only have global government bond yields plummeted to record low levels, but global equity valuations also reached levels recorded only three times in the last 100 years.

In their desperate search for yield, investors also have made loans to risky borrowers at interest rates that do not nearly compensate them for default risk. This has been especially the case in the advanced countries’ high-yield debt markets and in the emerging market corporate debt market, where borrowing in U.S. dollar terms has increased by a staggering $3 trillion over the last six years.

If anyone ever doubted that there is gross mispricing in global credit markets today, all one needs to do is ask how countries with such dubious creditworthiness as Iraq, Mongolia and Tajikistan can so easily tap those markets for funds.

Alternatively, one might ask how a serial defaulter like Argentina could place a 100-year bond on favorable terms or how Italy’s debt-laden government can borrow at cheaper rates than can the U.S. government.

An indication of how little seems to have been learned from the 2008 crisis is provided by the Federal Reserve’s recent seeming total disregard of asset price inflation in setting interest rate policy. During the course of 2017, the Federal Reserve stuck doggedly to the interest rate path it set itself at the start of the year. It did so despite a 25 percent increase in equity prices that boosted U.S. household wealth by $6 trillion since the start of the Trump administration. It also did so despite the further boost that the U.S. economy was receiving from a 10 percent dollar depreciation and the move to a very much more expansionary budget policy by the Trump administration.

Making today’s complacency in policymaking circles all the more difficult to understand is the fact that today’s asset and credit market bubbles only make sense at very low interest rates. Yet with the U.S. economy now at risk of overheating, especially because of Trump’s unfunded tax cuts and public spending increases at a time of close to full employment, there is every prospect that the Fed will need to adopt a much more aggressive monetary policy stance than at present if it is not to exceed its inflation target.

This heightens the risk that we cannot be far from the bursting of asset price bubbles and the repricing of credit market risk, with all the attendant dislocations that this can cause for the global economic and financial systems.

All of this would suggest that it is not too early for the world’s major economic policymakers to start thinking about how best to respond to the next global economic crisis. In particular, they might ask themselves whether, by having had the world’s major central banks respond to the last crisis by having increased the combined size of their balance sheets by $10 trillion, they might not have seriously distorted financial asset market prices and thereby have set up the stage for another boom-bust cycle.

Instead, policymakers might want to give serious thought to responding to the next global economic crisis by resorting to some variant of Milton Friedman’s “helicopter money,” whereby the central bank finances on the easiest of terms checks mailed out by the government to all of its citizens. Maybe then we will be able to generate an economic recovery without seriously distorting asset prices and by so doing we will have freed ourselves from the boom-bust cycles in which we seem now to be trapped.