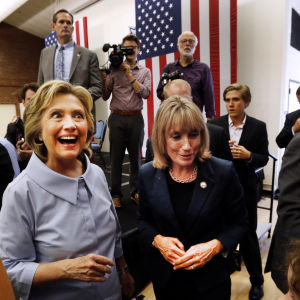 If Democrats are going to stake out a position critical of banks in general and Wall Street in particular, they are going to find themselves in a tight spot from time to time when they need expertise from people who worked for banks and on Wall Street. Just ask Maggie Hassan.

The New Hampshire governor, a Democrat, has collected all the right liberal endorsements in her bid to win a Senate seat in the fall, notably from Senator Elizabeth Warren, the Massachusetts Democrat whose signature issue is searing criticism of Wall Street. But she’s now facing flak from other Democrats who see her nomination of a former New Hampshire bank lobbyist to run the state’s supervisory agency as a betrayal of the cause.

In February, Hassan nominated Jerry Little, a Republican state senator who ran the New Hampshire Bankers Association for 10 years, to head the New Hampshire Banking Department, the state supervisor. The decision, not out of step with tradition in a state with no clear partisan divide, has rankled those inclined to support Hassan.

“We urge her to seek a qualified individual who will not be compromised by years of aggressive defense and support for an industry that he or she would be called upon to regulate,” reads a petition posted on the website of MoveOn, a liberal pressure group. “Prudence, fairness and trust demand a new appointee who has, at a minimum, an arm’s length relationship with the banking industry.”

The dustup highlights a problem that’s bound to vex Democrats who tap the powerful anti-Wall Street vein in American politics, but still need to govern effectively once they take office. If criticism of banks — and the “revolving door” between banks and government — is red meat to Democratic activists, then those same people are likely to howl in protest about bankers-turned-regulators, even if a Democrat duly elected finds that financiers actually have useful advice to offer.

As a force in the Democratic Party, Warren has backed Hassan, a two-term governor, in her bid to unseat Republican Kelly Ayotte, and helped her raise money. Despite a well-earned reputation as a Wall Street basher, Warren has argued that sometimes former executives can make good policy. But she hasn’t been shy about attacking presidential nominees from Wall Street to make the political point that presidents of the future will have to consult the party’s liberal wing on appointees — or face her wrath.

The petition’s originator, Elizabeth Ropp, is an acupuncturist in Manchester who is a strong supporter of Senator Bernie Sanders, the Vermont independent who’s run a surprisingly strong campaign for the Democratic nomination for president. The petition has garnered over 700 signatures.

“When a mutual friend of Bernie’s shared an article about Little’s nomination, she told me that I needed to tell other Bernie supporters,” Ropp said via email. “If there were a Bernie phone and a Bernie signal, I would have used them, so I launched my first MoveOn petition.”

Also, Colin Van Ostern, a Democrat who is seeking the governorship in the fall, professed misgivings about Little while refusing to take a stand either way until after a public hearing on his nomination. “I have serious doubts that his professional background is not consistent with what we need best from the independence and accountability in that role,” Van Ostern told NH1 News.

In a debate with Sanders, who thrashed her soundly in the New Hampshire primary, former Secretary of State Hillary Clinton paid her deference to Warren, promising to run personnel choices by her personally.

“I do agree that we have to end the revolving door,” Clinton said in the debate. “I will be looking for people who will put the interests of consumers first, who will do more to try to make sure Main Street flourishes, and I will very much reach out and ask for advice as to who should be appointed, including to Senator Warren and many of my other former colleagues in the Senate.”

American Rising, the Republican super PAC that produces opposition research on Democrats running for office, has highlighted the split among New Hampshire Democrats this week. Indeed, Warren herself has recognized the quandary of Democrats who want to campaign successfully but also govern with the occasional banker’s advice.

She has sought to inoculate herself against any charge of hypocrisy for criticizing Wall Street while supporting some bankers who play roles in government. Less than a month after taking her seat in the Senate, Warren outlined the circumstances under which a former banker might make a good government official, citing a willingness to listen to diverse constituencies and depart from industry orthodoxy as two criteria.

“If the right people go back and forth, the country will develop smarter, stronger rules,” Warren wrote. “But if the wrong people make the shuffle, then Washington will be rigged even more for Wall Street — and every middle-class family will pay the consequences.”

Warren has also supported or promoted any number of former bankers in her work setting up the Consumer Financial Protection Bureau and as a senator.

Raj Date, a former executive at Deutsche Bank and Capital One, was a close aide in setting up the agency. So was Elizabeth Vale, a 13-year veteran of Morgan Stanley. She is a strong supporter of Gary Gensler, a former Goldman Sachs executive who drove the creation of new regulations on derivatives as chairman of the Commodity Futures Trading Commission, and is now chief financial officer of Hillary Clinton’s presidential campaign.

She also backed Stanley Fischer to be the vice-chairman of the Federal Reserve Board, even though he worked at Citigroup, a longtime target of her ire. And she voted to confirm Jacob Lew, another Citigroup alumnus.

Warren, more than any other senator, was also responsible for torpedoing the nomination of Antonio Weiss, a longtime executive at Lazard, an investment bank and asset manager. The Obama administration figured him an easy pick as an undersecretary of the Treasury for domestic finance in November 2014.

The Massachusetts senator took on the qualifications of Weiss, who worked primarily in international mergers and acquisitions, to do a job focused on domestic issues. She excoriated his work on a tax inversion deal. And she blasted Lazard for a $21 million payment due to Weiss if he were confirmed for the job — a not-unheard-of practice for Wall Street firms who like the idea that their executives might return with good government connections.

The political backdrop to the nomination was that Warren had been suggesting potential nominees to the White House for months for the Federal Reserve and other regulators, and got no response, according to people briefed on the matter. She had even given a speech in April 2014 exhorting President Barack Obama to look somewhere other than Wall Street for new officials.

“The administration needs to get serious about appointing top officials with a broader mix of career backgrounds, relationships and worldviews,” Warren said in an April 2014 speech. “That means resisting pressure to pick people with big bank ties for so many top economic positions when plenty of other companies and industries play critical roles in the economy as well.”

In January 2015, Obama surrendered to Warren by withdrawing the Weiss nomination, but still got his man in. Weiss became a counselor to Lew, a position not requiring Senate confirmation.

The Weiss nomination fight — and the $21 million payment — motivated Senator Tammy Baldwin, a Wisconsin Democrat, to introduce legislation last year that would prohibit companies from disbursing money to executives who depart for government posts. And Warren also exhorted Clinton privately to recruit people onto her economic team from circles outside Wall Street.

Warren, through her spokeswoman Lacey Rose, declined to comment on Hassan’s nomination of the former bank lobbyist Little to run New Hampshire’s regulator.

Despite the muscular motto of the state — “Live Free or Die” — New Hampshire would be an odd place to make a last-ditch stand on the appointment of bank lobbyists to be regulators.

There are a total of 37 banks in New Hampshire, out of about 6,500 nationwide. Of those, only 17 fall under the responsibility of the state’s regulators. The rest owe their charters to federal authorities, or to other states, principally Massachusetts. The titans of the Granite State’s financial establishment include Piscataqua Savings Bank, Sugar River Bank and, of course, Granite Bank.

Neither is Little, 60, the caricature of the monied bank lobbyist that liberal Democrats love to hate. He’s the son of a former president of a small bank in Concord, New Hampshire.

Residing in Weare, New Hampshire — population less than 9,000 — Little was a television reporter before joining with John Sununu, the former Republican governor. Little joined the banking association as spokesman and became its director 2 years later, a position he held for 20 years. The group is small enough that the director wears other hats, notably as head of its insurance trust, which serves member banks.

The community of lawmakers and officials is tight-knit enough that the partisan edges to Little’s nomination aren’t terribly sharp. The gubernatorial candidate might have heartburn about Little, but Democratic State Senator Dan Feltes has no such doubts.

Feltes, a former legal aid attorney who worked on consumer-protection cases, has defended Little’s integrity, independence and commitment to consumers. And he pointedly criticized the MoveOn petition.

“This rhetoric strikes a populist chord I very much share, but sometimes rhetoric doesn’t match reality,” Feltes wrote in the Nashua Telegraph. “In my view, this is one of those cases.”

Little left the banking association at the end of 2011, right when federal agencies began churning out the new regulations required under the law Congress passed in response to the 2008 financial crisis. He said at the time that a simplified mortgage disclosure form created by Warren’s brainchild, the Consumer Financial Protection Bureau, was an improvement on the reams of paperwork home loans require, even as he cautioned about the costs to banks.

“The real cost of compliance is not the form in front of consumers, it’s the internal paperwork involved in proving to the next examiner that you’re doing the mortgage properly,” Little said in 2011.