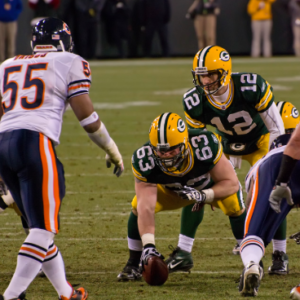 Posted to Finance September 10, 2019 by Michael Farren and Anne Philpot

The NFL kicked off season number 100 last Thursday with the league’s longest rivalry, 199 games long, when the Green Bay Packers defeated the Chicago Bears at historic Soldier Field. The matchup represents a century of professional football, but it also helps illustrate the clash between the NFL and fans who want their own hometown teams.

Like nearly every professional sports team, the Bears are controlled by a private ownership group. But the Packers are unique as the “only publicly-owned, not-for-profit, major league professional team” in the entire country.

Why does this matter? Because the Packers are the NFL’s truest “hometown” team.

Local fans saved the team from bankruptcy in 1923 (and 1935 and 1950) by buying stock in it. Relocating the Packers to another city — like the St. Louis Rams and San Diego Chargers did when both moved to Los Angeles two years ago — would require a “yes” vote from a majority of these stockholders. Nonprofit corporation bylaws even state that the Packers are “a community project, intended to promote community welfare.” If the team is ever sold, the profits must go to a local charity.

“It makes (the Packers) an example,” says ESPN’s Patrick Hruby. “A case study. A working model for a better way to organize and administer pro sports.”

“Da Bears” are certainly a hometown team, too, and have been owned by the same family since 1920. Still, as a for-profit team, the threat of jumping ship will always exist. This isn’t necessarily bad — cities grow and shrink over time and sports preferences change — but the arrangement is intentional on the NFL’s part. It has banned other teams from following Green Bay’s model and even prevents publicly traded corporations from team ownership.

In fact, the NFL acts like a football cartel, making sure there are fewer teams than there are viable markets. Large cities like Portland, Orlando and San Antonio would likely have their own teams without the NFL barring the door.

This waiting list of cities allows team owners to make credible threats to move their franchises, creating leverage and turning fans’ anguish into political pressure to extort subsidies from local politicians. Taxpayers pay for most professional sports stadiums in one fashion or another, totaling over $1 billion in handouts every year.

Teams tend to argue that new stadiums grow the local economy, but economists overwhelmingly disagree. As University of Chicago sports economist Allen Sanderson said, “If you want to inject money into the local economy, it would be better to drop it from a helicopter than invest it in a new ballpark.” Americans agree — around 70 percent are against publicly funded football stadiums.

But how did we get to the point where a group of billionaires can extract billions in handouts from local taxpayers?

The early NFL eliminated 10 teams in 1927 and began tightly controlling entry. Frustrated would-be team owners in football-hungry cities responded by creating many rival leagues since then. The American Football League claimed that NFL teams conspired to monopolize the sport and lost a 1962 antitrust suit, but was popular enough to force a merger several years later.

But most other competitors, like the USFL — which attracted Hall-of-Fame talent on the field and future-President Trump as one owner — have failed to break in. As sports antitrust attorney Stephen Ross writes, the NFL’s entrenchment in major media markets “may be a critical factor” in the failure of competing leagues.

Perhaps competition from yet another new football league, the revived XFL (with a media contract with ESPN and Fox Sports), will push the NFL to put fans first. Both leagues should consider allowing freer entry for new teams — giving more fans their hometown team — and enabling more ownership models, including non-profit organizations like the Packers. And, of course, either league could win a lot of goodwill by forswearing subsidies.

Even with these changes, teams might still move — but diehard fans would have a better chance to keep their hometown heroes around. As Cheeseheads can attest, there’s nothing better than that.