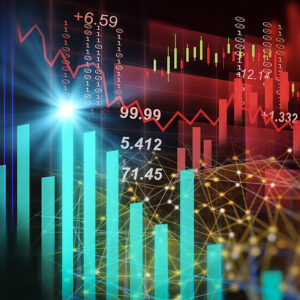 After nearly a week in lockdown, the London Metal Exchange resumed trading in nickel on Wednesday — only to shut it back down almost immediately due to extreme volatility.

Nickel is a niche metal that plays a key role in the global supply chain. It’s also a canary in the coal mine for the potential effect of Russia’s military action in Ukraine and its potential effect on metals, mining and the materials needed to develop green energy alternatives.

“The current events are unprecedented,”  London Metal Exchange said in a news release announcing the March 8 suspension of trading.

Three-month nickel prices on the exchange briefly jumped to a record high above $100,000 a metric ton, and the closing price nearly doubled in a week.

Nickel’s precipitous price increase is largely due to short selling and market moves, according to Mark Thornton, an economist with the Mises Institute. The Wall Street Journal reports the key player is Chinese metals giant Tsingshan Holding Group, which “racked up billions of dollars in losses from wrong-way bets.”

However, says Thornton, events in Ukraine have also had an effect.

“The metal went up slowly for several years and people shorted it, then the Russian invasion propped up the price higher because nickel is used in weapons and Russia is a major producer, and the price went parabolic as a result,” he said. The war added to price pressures.

That’s because Russia and Ukraine are major global producers of metals. Ukraine ranks fourth globally in total natural resources and has the top proven recoverable reserves of uranium, according to Investment Monitor.

And Russia is a major producer of key elements in the electric vehicle supply chain, including aluminum, palladium and — especially — nickel. Russia produces more than 10 percent of the world’s nickel and, by some estimates, about 14 percent of all global mineral extraction.

Not to mention more traditional energy products like coal, oil and gas.

“The energy issue is first and foremost. On the small side, certain U.S. refiners need access to Russian dirty crude oil,” Thornton said. “On the large side, Europe needs Russian-sourced natural gas and this latter connection could send inflationary shudders through European and world markets.”

Asked about the likely effect of Russia’s invasion in weeks to come, Richard Smith of the Foundation of the Study of Cycles did not see good news ahead.

“More of the same. Huge ‘limit up’ spikes in metals and big gains in miners,” said Smith, a Berkeley mathematician and expert in system sciences. “Metals, mining and energy,” Smith added, “are all obviously hit. Some smaller markets will stop trading. Technology is hit from more chip supply chain issues too.”

While the stock market is reacting badly to the war, the long-term effects of sanctions or the cutoff of these metals could be mixed, says Robert Atkinson, the president of the Information, Technology and Innovation Foundation and an expert in international trade and competitiveness. A key factor is whether Russia and Eastern Europe have a monopoly on these minerals, he said.

“If the disruptions are related to production or distribution issues, as opposed to trade sanctions, that is another story,” Atkinson said. “Global production would go down, but only until other sources are expanded.”

The net effect could be a redistribution of supply and demand, rather than a steady rise in prices. When China hit Australia with sanctions and cut off mineral exports, he said, “Australia relatively easily found new markets in nations that were prior getting the minerals from nations that now expanded Chinese exports.”

There’s also the ability of the United States and other nations to increase their own production of must-have minerals by expanding their investment in mining. However, the industry has faced regulatory headwinds, including a proposal debated by Congress last fall to significantly increase taxes and royalty fees on the domestic mining industry. A bipartisan group of U.S. senators shot it down, and in hindsight the proposal looks even more counterproductive.

“High price inflation was already cooked into this long-simmering soup that the major central banks have been cooking up for years or even decades,” said Mark Thornton, the Mises economist. “And you cannot build and grow an economy without metals, so higher prices are going to worsen the coming recession.”

JP Morgan Chase and Barclays are warning that, in the wake of Russia’s invasion of Ukraine, previous projections for Western economies are being revised downward.

“Soaring commodity prices and increased risk aversion caused by the Russia-Ukraine war imply a stagflationary shock,” wrote Barclays’ head of economic research Christian Keller. “While Europe looks more vulnerable than the U.S., and the U.K. is somewhere in between, China seems least exposed.”