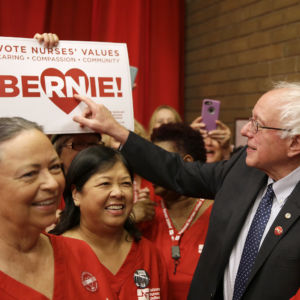 Television cameras panning across the churn of the Democratic National Convention this July revealed men and women with flimsy hats made of green felt clustered in the crowd. Most of the people who donned them came to Philadelphia to support septuagenarian Bernie Sanders, suggesting an ode to Peter Pan, the boy who wouldn’t grow up.

Instead, those hats proved that a once-marginal movement had matured.

For a decade, National Nurses United, the nation’s largest union of nurses, lived on the margins of mainstream politics, donning their caps to show support for a 0.5 percent levy on Wall Street transactions — the “Robin Hood” tax, so named because it would finance increased federal investment in healthcare.

Having advocated the financial transactions tax for years, the NNU endorsed Sen. Sanders’ presidential campaign well before the 2016 primary season kicked off, and persuaded the Vermont insurgent to make it a pillar of his campaign.

“The nurses were the ones, of everybody, who were our strongest allies on this. The strongest and the loudest,” says Warren Gunnels, the policy director on Sanders’ campaign. “They convinced us to go much bolder than we had ever thought of before,” says Gunnels.

Though Sanders fell short of winning the Democratic presidential nomination, he built the “Robin Hood” tax into the party’s platform. The financial transactions tax—once a pet cause of Europeans on the leftist fringe—officially became part of a major-party governing blueprint, entering the mainstream thanks in large part to those NNU members in green caps.

The idea of taxing transactions is nearly as old as civilization. But the concept of taxing financial transactions is a relatively recent addition to the policy world, gaining traction in the 20th century based on the work of two economists: John Maynard Keynes, who proposed it in the midst of the Great Depression, and James Tobin, who floated the tax for currency trading in the 1970s.

As the idea exists today, a financial transactions tax would impose a tiny fee on the sale of a stock, bond, derivative or other financial instrument—and in so doing, discourage both financial speculation and the get-rich-quick approach to purchasing stocks. Even a small tax would be enough to, in Tobin’s words, “throw sand in the wheels” of global finance because short-term, high-frequency trades would simply be unprofitable. Depending on the design, it could also raise substantial revenue.

NNU members say that their support for the tax stems from their everyday, lived realities of working in an underfunded and unequal healthcare system, of seeing patients without insurance who are literally forced to choose between paying rent and purchasing medication. “We are starting from an incredible array of unmet … needs in our society,” says Ken Zinn, the NNU’s political director.

Their alternative? The creation of a single-payer healthcare system, expanding Medicare to cover all Americans — a proposal popular in many progressive circles. But such a massive program would require vast amounts of new revenue. In short, says Zinn, “We need to get to the people who have the money.”

The nurses “had very good access to Senator Sanders early on,” says Robert Kraig, a Sanders supporter who served on the DNC’s full platform committee. Weeks later, Sanders announced he was running for president.

A month after Ellison and Sanders unveiled their bill, Hillary Clinton officially kicked off her bid for the White House. Viewing from afar, progressives were gearing up for a fight between liberal icon Bernie Sanders and establishment moderate Hillary Clinton.

But that view missed an important bit of campaign-staffing news. Days after Clinton officially became a 2016 candidate, Gary Gensler, the former chairman of the Commodity Futures Trading Commission, was named the chief financial officer of her campaign.

Gensler has a long background in the financial world, both as a longtime employee of Goldman Sachs and as a senior official in the Treasury Department, where he worked under noted de-regulator Robert Rubin. As CFTC chair, he brought the vast unregulated derivatives market known as “swaps” under federal regulation for the first time, incurring the enmity of his former colleagues in finance.

Gensler had emerged as a chief critic of high-frequency trading, a form of speculation that uses lightning-fast technology to profit from tiny fluctuations in stock prices.

Though Clinton took her share of hits from Sanders over ties to Wall Street, the influence of the turncoat Gensler was profound. So, the Clinton campaign’s policy minds had no issue with the financial levy.

Emails published by Wikileaks this fall, though still unverified by the campaign, reveal that Clinton’s advisers also saw political gold in the financial transactions tax — the FTT, in liberal circles — even as they fretted about looking like they were aping Sanders.

“I’m wary of the growing economic populism on the center-left and I believe an FTT is the kind of bold proposal that both makes sense on policy grounds and achieves important political objectives,” Neera Tanden, president of the Center for American Progress, wrote in one email in August 2015.

Gene Sperling, a longtime Clintonite, put the matter as succinctly as anyone, critic or advocate, ever has: “Wall Street pays for Main Street.”

Two months later, as part of a lengthy economic-reform proposal, Clinton called for a tax on financial transactions by high-frequency traders. “Over the last decade, equity markets have become less transparent—often serving the interests of high-frequency traders and ‘dark pool’ operators at the expense of the investing public,” Clinton wrote in the policy brief.

So Clinton was open to a tax on high-frequency trades.

Its advocates wanted to take it a step further, and ensure that whomever won the nomination, a tax on all financial transactions would be in the offing. Throughout the Democratic presidential primaries, as Clinton and Sanders jousted over who was more able to reform Wall Street, Washington’s progressive circles percolated with ideas on how to do just that.

In May 2016, a coalition of lefty groups and organized labor, formed Take On Wall Street, a new campaign against the industry’s influence. Crucially, the alliance roped together liberal outfits on both sides of the Clinton-Sanders divide: The Communications Workers of America, MoveOn and Democracy for America had all backed Sanders, while the American Federation of Teachers and the Services Employees International Union endorsed Clinton.

Their new lobbying focused on a clutch of priorities not covered by 2010’s Dodd-Frank Act, including a financial transactions tax.

Within a month of the group’s launch, Clinton clinched the Democratic nomination, and the Sanders and Clinton camps entered a new quarrel over the makeup of the party’s platform-drafting committee. Sanders sought to install RoseAnn DeMoro, the head of National Nurses United; the Clinton camp vetoed that choice over worries that DeMoro would make a public stand on single-payer health care, a headache that would have, for Clinton, dampened the unifying spirit her campaign so badly wanted.

But advocates of the financial transaction tax got someone even better on the committee: Keith Ellison, Sanders’ co-sponsor on the Inclusive Prosperity Act. At a meeting of the platform-drafting committee in St. Louis, Ellison made his pitch.

With a haggard look and a stack of Starbucks coffee cups behind him, Ellison flipped over his iPhone to avoid distractions, and proposed the tax to the committee members.

Ellison, and by extension Sanders, had the Clinton forces in a bind: Though Clinton partisans made up the majority of the drafting committee and would win an actual vote on the topic, they hated how it would look. A public vote to slap down a progressive cause celebre would inflame the very Sanders voters Clinton sought to draw into the fold.

But voting for the proposal carried a major risk, too. It’s not that Clinton wanted to defend the finance industry—after all, there is no market for chumminess with Wall Street in this election—but her campaign did harbor fears that Republicans might turn a call for a broad levy into a “tax on retirement savings” talking point that would resonate with middle-class voters in the general election.

Quiet negotiations on a deal ensued. The compromise language made no mention of raising federal revenue, stating only that Democrats “support a financial transactions tax on Wall Street to curb excessive speculation and high-frequency trading.” And it contained an important caveat: “We acknowledge that there is room within our party for a diversity of views on a broader financial transactions tax.”

The language of the platform left the nurses somewhat uneasy. They’d fought for years for a broad tax of 0.5 percent on all financial transactions. “That’s what I would call weasel language,” says Zinn. “When you say there is a ‘diversity of views,’ that runs the risk that it’s not worth the paper it’s printed on.”

Still, other union activists found themselves rubbing their eyes at the nurses’ success.

“We’ve been shocked at how quickly this came from something on the edges of the conversation to something that is serious, and something that everyone is willing to consider,” says Shane Larson, national legislative director for the Communications Workers of America.

The nurses had won a round.

Even if Hillary Clinton moves into the White House, nothing guarantees enactment of the Democratic platform. The variables – control of the House and Senate, a new Treasury secretary and other liberal priorities – are many. The nurses aren’t putting away their green hats just yet.

Rep. Peter DeFazio, an Oregon Democrat, dropped a bill this year that would impose a 0.03 percent tax on financial transactions, raising $417 billion over 10 years, according to the Joint Committee on Taxation. The nurses plan to push for a 0.5 percent tax, citing a University of Massachusetts – Amherst study that it would raise $300 billion annually.

“Wall Street will fight as hard against that bill as they do against a bill that raises real revenue?” Zinn said. “Why not pass something that has an impact?”