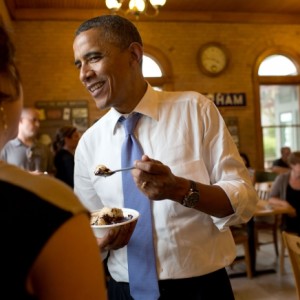 President Barack Obama eats a hot fudge sundae as he talks with patrons at the UNH Dairy Bar on the University of New Hampshire campus in Durham, N.H., June 25, 2012. (Official White House Photo by Pete Souza)
[IS] Opinions

President Obama Can’t Have His Ice Cream and Eat It, Too

President Obama recently asked business owners to help create summer jobs for teenagers. He reminisced about his first job at an ice cream parlor and lamented that getting hired is harder than ever for young people. He’s right.

President Obama’s comments highlight his Summer Opportunity Project, which aims to connect young people with their first job. This is important because research shows that the experience a first job offers is an important steppingstone to a successful career. Conversely, youth unemployment creates lingering effects that diminish future income.

Scholars at the Brookings Institution and the Cato Institute have documented a general decline in teen employment since 2000. Since unemployed teens are associated with increased crime, deviant behavior and drug abuse, these developments are indeed worrisome.

Higher minimum wages prompt more workers to seek employment. This means that teens from affluent families are more likely to compete for the same jobs as poorer teens. If affluent teens have competitive advantages in getting hired and staying employed, then the minimum wage harms the employment opportunities of poor teens. Research by Mark Turner and Berna Demiralp at Johns Hopkins University shows that black and Hispanic teens in urban areas are more likely to become “idle” — neither employed nor attending school — after minimum wage increases.

Former Labor Secretary Robert Reich argues that minimum wage increases benefit businesses by reducing employee turnover, decreasing overall hiring costs. However, this is actually bad for workers, since they have less opportunity to move into better jobs as their skills increase.

President Obama’s Summer Opportunity Project is laudable. Early experience in the workforce is a key element of long-term career success. However, the higher minimum wage policies that he consistently advocates for actually prevent teens from being hired. And those who most need job experience to develop career skills — poor and minority teens — are hurt the worst. Not even a president can have his ice cream and eat it, too.