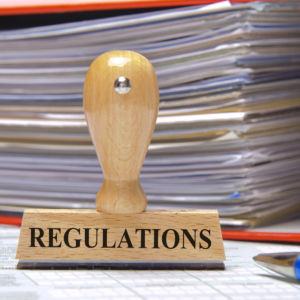 Regulations are a big obstacle in fighting the coronavirus. They are also a major obstacle to economic recovery.

For no good reason, it was illegal to offer many telemedicine services until the virus forced regulators’ hand. Rules restricting crowdfunding and other financial innovations are making it more difficult for small businesses to get the capital they need to stay afloat. Other rules get in the way of homeschooling and telecommuting.

But how just big is the problem, and what are some ways to fix it?

According to the new Competitive Enterprise Institute study, “Ten Thousand Commandments,” federal regulations cost nearly $2 trillion per year, or more than $14,000 per household. The only thing in a typical family’s budget that costs more than regulation is housing — which itself is made more expensive by zoning ordinances, tariffs on steel and lumber, and arcane mortgage regulations.

If the federal regulatory state were its own country, it would have the eighth largest economy in the world, behind Italy and ahead of Brazil.

The United States, as the world’s largest economy, does an admirable job shouldering this burden during good times, just as a bigger dog can host more fleas. But the good times are gone now. Unemployment is nearing Great Depression levels. Retail spending has declined by record levels two months in a row.

When second quarter GDP numbers come out in July, they may well show the sharpest drop ever recorded, including the Great Depression.

From approving medical treatments to allowing restaurants to offer delivery, people are finding out that if a regulation isn’t needed during a crisis, it was probably never needed to begin with — hence efforts like the Competitive Enterprise Institute’s #NeverNeeded campaign.

A May 19 executive order from President Trump even directs agencies to do more to waive unneeded regulations — and to make the waivers permanent.

But there is more to reform than getting rid of this or that regulation. The rulemaking process itself needs reform. That process enables more than 3,000 new regulations to hit the books most years and has ballooned the Code of Federal Regulations to more than 185,000 pages in length. Not only does that number need to go down, but it cannot build up to that length again.

Had net neutrality regulations not been loosened, we would now lack the wave of tech investment that has allowed video conferencing services like Zoom to enable people to work and attend school from home, for Google to keep us informed, for Uber and Amazon to safely deliver food and supplies, for social media to keep people connected, and for Netflix to keep people sane.

Instead, we would be enduring the same slow, throttled internet speeds that Europeans are now dealing with.

We got lucky with net neutrality repeal. But what regulations are still on the books that will make us less resilient against the next crisis?

Just as every gallon of milk has an expiration date, every new regulation should have an automatic sunset. That way, if a rule proves unworkable or goes obsolete, it will automatically go away. Worthwhile rules could easily be renewed.

Congress should create an independent commission to go through large parts of the 185,000 pages of federal rules each year and send lawmakers a package of harmful or old rules to repeal with a single up-or-down vote. And agencies should permanently waive the never-needed regulations they have already temporarily suspended.

The worst of the coronavirus will eventually pass. Not everything will go back to the way it was, but it will be far better than what people are now enduring. New virus treatments will become available, and regulatory agencies will deserve credit for approving them quickly.

But there is more to do, both right now, and for the long-term recovery. Policymakers need to get rid of more never-needed rules against healthcare, work-at-home jobs and education, financing for small businesses, and more.

They have the ability to clean up the regulatory process itself, so the country will be more resilient against the crisis. They should make preparation a priority this time.

Clyde Wayne Crews Jr. is vice president for policy at the Competitive Institute and author of the annual report “Ten Thousand Commandments: An Annual Snapshot of the Federal Regulatory State.” Ryan Young is a senior fellow at CEI. They wrote this for InsideSources.com.