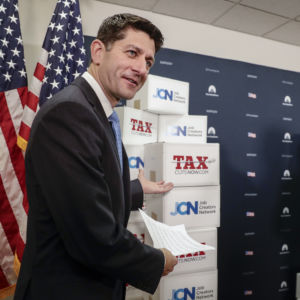 House Speaker Ryan’s decision not to run for re-election spells major trouble for the U.S. economy. With his departure, those who want to make our entitlement programs fiscally sustainable will lose a major ally.

For years, Ryan has fought to rein in runaway federal spending. As recently as on December 7 last year, CNN reported that Speaker Ryan was planning to address entitlement reform as a way to rein in the budget deficit. Yet on January 12, according to CNBC, Ryan toned down the reform ambitions, suggesting the House would not address Social Security, Medicare and Medicaid reforms in 2018. Then, on April 13 (print edition) the Wall Street Journal reported:

When House Speaker Paul Ryan leaves Congress, the Republican Party will lose its most influential advocate for changes to Social Security, Medicare and Medicaid. … These retirement and health-care programs are popular with voters, but their costs are rising faster than the current funding to pay for them.

This is exactly why we should all be worried by Ryan’s departure. There is no secret that the United States has a mounting debt problem – literally – but what is less understood is just how acutely dangerous this problem is.

Bluntly speaking, it is no exaggeration to say that the United States is closing in on a Greek-style debt crisis. We already fulfill the three most important conditions for a crisis of that kind.

The first condition is that government spending is dominated by entitlement programs. The United States meets this condition with a margin. Contrary to common belief, our welfare state is quite similar to its European peers:

Two thirds of the federal government’s budget is dedicated to the welfare state. Our military has been reduced to a fiscal residual.

When the welfare state dominates the budget, it also dominates political conversation. Scared of losing votes, politicians will deny the risks with a massive debt for as long as they possibly can. The Bipartisan Budget Act is a prime example of this, and how the crisis denial transcends ideological differences.

The second condition for a Greek-style crisis is slow economic growth. A sluggish GDP slows down the growth in tax revenue Taxpayers simply have a hard time funding government.

At the same time, slow growth means stagnant wages, which in turn keeps people in income layers where they are eligible for tax-paid entitlements. The costs of the welfare state continue to rise, while tax revenue falls behind.

Last time the U.S. economy grew at three percent was in 2005. With the economy in low gear, entitlement ranks continue to swell: today, a record number of working-age Americans rely on Medicaid or ACA for their health care. Far more people than those who are poor are enrolled in SNAP. And so on.

Slow growth has created the same structural imbalance in the U.S. economy as it did in Greece, Spain and other European countries prior to their fiscal crises.

The third condition is the monetization of perennial deficits. Soon after the Great Depression broke out, the European Central Bank began monetizing deficits all over Europe. Initially, they did it through “bail outs” of financial institutions, then they shifted to outright Quantitative Easing that is going on to this day. The Federal Reserve was first with a QE policy, but the net result is the same on both sides of the Atlantic Ocean: big, new piles of government debt courtesy of central banks printing money on over time.

Deficit monetization is the last resort of deficit funding. It kicks in when legislatures have reached their maximum in terms of taxes and the debt-market investors are sending clear signals of weakening trust in treasury bonds. The credit downgrades of the U.S. government under Obama’s first term are examples of such signals.

The fact that we meet these conditions does not mean that a debt crisis is imminent. However, it means that very little is needed to tip us over the fiscal cliff. Once that happens – very likely in the next recession – an oblivious Congress will be hurled into the same kind of fiscal panic that lawmakers in various European countries have been faced with on several occasions over the past 30 years, from Denmark and Sweden to Ireland, Portugal, Spain and Greece.

With Paul Ryan leaving Congress, the legislative bulwark against fiscal panic and a devastating encounter with austerity is severely weakened. Is there anyone, Republican or Democrat, who is willing to step up and take his place?