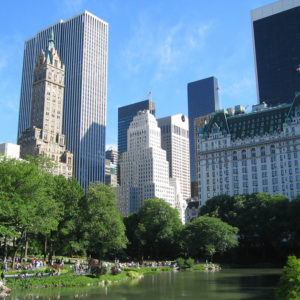 In the era of Bernie Sanders socialism and Elizabeth Warren wealth taxes, what could be easier in a blue state like New York than raising taxes on the second homes of the super-rich? And yet a proposal to do just that appears all but dead in Albany as Empire State politicians face the same forces slowing down progressive housing policies across the nation:

The “pied-a-terre tax,” proposed by N.Y. State Senator Brad Hoylman, would have raised taxes on apartments and houses owned by non-residents and worth more than $5 million. The rate would start a 0.5 percent but go as high as 4 percent for properties valued more than $25 million.

“If they have the money to buy a $5 million apartment, which is not their prime residence, and it’s their little Manhattan getaway, they can afford the tax,” Gov. Andrew Cuomo said in support of the pied-a-terre tax just a few weeks ago.

But on Tuesday of this week, Cuomo changed his tune. He and other advocates of the plan and began backing away from the idea and embracing instead a one-time transfer tax on all high-dollar real estate transactions.  Why?

Because the impact of a pied-a-terre tax would be felt far beyond the penthouses of Park Avenue.  New York City’s high-end real estate market is a major generator of economic activity, from construction to restaurants to personal services. And that segment of the city’s economy is already struggling.

New York City real estate broker Donna Olshan told Bloomberg that the high-end market (properties valued at more than $4 million) is down 20 percent year to year and prices are falling.

Real estate professionals like Elizabeth Ann Stribling-Kivlan report that planned purchases were put at risk by talk of a tax hike. “We’ve already heard from several prospective buyers who say they will walk if this tax is passed,” Stribling-Kivlan wrote in the NY Daily News.

Earlier this month, Joseph Brusuelas, chief economist at RSM, U.S  warned that the New York real estate market is already “moving from an extended period of stagnation to one of outright softening.”

No wonder Cuomo and Company are backing down. Their proposed pied-a-terre tax could have the unintended effect of driving overall tax revenues down. It almost certainly would not have generated the $650 million per year promised by its supporters.

This is a common thread in progressive housing policy: Populist ideas that make the real problems worse.

Rent control is a perfect example.  Oregon just became the first state in the nation to impose a statewide rent control mandate in response to what many progressive activists call a “housing crisis.” What Oregon lawmakers didn’t enact, however, were new laws of economics to address the well-established impact of rent control.

“Rent control has been tried again and again, and it doesn’t work. It hasn’t worked in New York or Paris or anywhere else. Instead, it’s had the opposite effect, hurting affordability in the long run and decreasing the quality of housing,” de Rugy said.

The impact of rent control on housing isn’t a secret. In 2000, liberal economist Paul Krugman wrote,  “the analysis of rent control is among the best-understood issues in all of economics, and — among economists, anyway — one of the least controversial…a ceiling on rents reduces the quality and quantity of housing.”

According to rent control advocates, the turning point in the current debate come in 2016 when the city of Richmond, CA passed a rent-control ordinance. “It opened the floodgates,” said Shanti Singh of Tenants Together, a San Francisco-based tenants’ rights group.

But did it close down rising rents? Since January 2017 when Richmond’s rent-control law took effect, the average rent for a two-bedroom apartment in California rose by just 4.2 percent, while the price of the same unit in rent-controlled Richmond jumped 8.6 percent.

“Politicians don’t want to do what they should be doing, which is removing regulations that make housing more expensive. Zoning, permitting, all the things that drive up the cost of creating housing supply,” says de Rugy. “Instead they raise taxes and impose rent controls that lower supply.