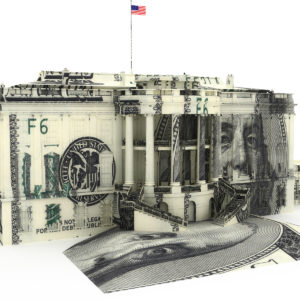 Point: Increase the Public Debt at Your Peril

Editor’s Note: For an alternative viewpoint, please see: Counterpoint: Debts and Deficits — Should We Be Worried?

Milton Friedman never tired of reminding us that in economics there is no such thing as a free lunch. If ever his adage had validity it has to be in relation to the question of running up excessive government debt. While throwing caution to the wind and increasing our public debt now might allow our government to finance a large unfunded tax cut, it does so at the very real risk of mortgaging our children and our grandchildren’s economic future.

Among the reasons to be concerned that the Republican majority abandoned its long-held principles of sound public-finance management by going along with a large unfunded tax cut is that the United States already has a compromised public debt position. Indeed, according to the Organization for Economic Cooperation and Development, our country’s public debt is already close to 100 percent of GDP. This is a level that is widely considered by economists to be in the danger zone.

With such a high public debt level, one would have thought the last thing that the country could now afford was a large tax cut that would increase that debt further by as much as $1.5 trillion over the next decade.

Sound public finance management would underline how ill advised it was for us to have chosen this particular economic juncture to put ourselves on an ever-increasing public debt path. The basic principles of sound public finance suggests that in the good economic times, when the economy is humming along well and when unemployment is low, one should make every effort to reduce the public debt. One does so in order to leave room for increasing the budget deficit and running up public debt in the bad times when the economy might need a fiscal boost.

One might ask with U.S. unemployment already down to a decade long low of around 4 percent and with the economy growing at a healthy 3 percent clip, did the economy really now need a fiscal boost? Further one might ask whether we should not already now be thinking about how our public finances will deteriorate further if the economy were for any reason to go into recession?

By having used up our fiscal space now in the good times, we run the risk of not having room to increase the budget deficit in the bad economic times to provide the economy a boost when it might really be needed.

Those who seem to be unconcerned by our country’s budget deficit and by its already large public debt level point to the currently very low long-term interest rates at which the U.S. government can presently fund itself. What they fail to take into account is that these low interest rates have been the artificial product of the Federal Reserve’s extraordinarily easy monetary policy over the last eight years to get the economy back onto its feet.

As such, those interest rates are unlikely to stay permanently low and when they start rising the government could have difficulty financing itself cheaply. Indeed, now that the economy is approaching full employment, the Fed has already started the process of raising interest rates and reducing the size of its balance sheet.

Worse yet, the currently expansive budget policy might force the Fed to raise interest rates at a faster pace than it otherwise would have done. When it does so, the government’s interest rate costs are surely bound to rise.

Those who are sanguine about increased budget deficits and rising public debt also fail to take into account how increasingly reliant such a policy course makes us on foreign financing. Increasing our budget deficit has the effect of reducing the level of our country’s public savings and, by forcing interest rates higher, it also tends to increase the value of the dollar. That in turn has the effect of increasing our trade deficit, which requires yet more resort to foreign financing.

Those who are unconcerned by our increased reliance on foreign financing seem to turn a blind eye to how heavily indebted our country’s government already is to countries like China, which are not particularly well disposed to us. One would have thought that such considerations would have dictated that, far from further increasing our reliance on such foreign sources of finance, we should have been making every effort to reduce our external economic vulnerability by paying down our debt.

The book of Psalms teaches us that what one might sow in tears one might reap in joy. Sadly, there are all too many reasons to think that by our sowing in joy with an unfunded tax cut, our children are likely to reap in sorrow the fruits of lower long-run economic growth.