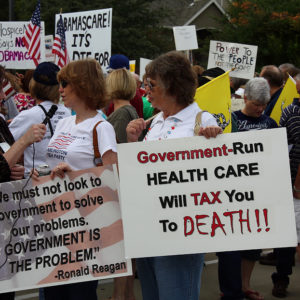 Push for Price Controls Relies on Other Countries’ Socialist Policies

Addressing healthcare at the State of the Union Address in February, President Trump drew a bright, and worthy, line in the sand. “We will never let socialism destroy American healthcare,” he said.

The mechanism will be to link the price that the federal government pays for drugs under Medicare Part B and Part D to what foreign governments pay — governments that have a heavy hand in controlling the healthcare of their citizens.

Campaigning trumps all, even the fight against socialism.

The executive order came after discussions between the White House and pharmaceutical industry leaders broke down when Trump Chief of Staff Mark Meadows demanded that drug companies mail seniors $100 cash “Trump Cards” ahead of Election Day.

The notion behind government price controls, that politicians can simply bend the laws of supply and demand to their political will, is not new, certainly not in the healthcare industry.

Given the nature of the proposed regulations, the countries listed on the index will certainly have their own government mandated price ceilings. That means that the U.S. will in effect import other countries’ socialist schemes to prop up our own.

In the proposed models, it is likely that costs will be passed onto patients outside of Medicare.

The effect on this much larger group of consumers will create a huge opening for the ongoing Democrat campaign for “Medicare For All,” which itself is but a step toward a complete federal government takeover of healthcare that goes even further than the Affordable Care Act.

The antidote for all this socialism, of course, is a proper understanding and implementation of policy that applies free market dynamics.

Addressing the enormous costs of drug development, including the review and approval process at the Food and Drug Administration (FDA), is a logical place to start.

The current patent approval process routinely takes upward 20 years, and the FDA process that takes about 12 years. Safety should of course always be the top priority, but It is hard to imagine that our country cannot do better than those time frames.

In a 2014 study, Tufts University found that the average cost of bringing one new drug to market is $2.6 billion, which is unsurprisingly a principal reason for the costs to consumers. Lowering the tremendous government-imposed barriers to entry in the overall market would lead to more competition and lower prices.

A price-control model will result in an entirely new calculus by drug manufacturers, who will have to account for the systemic changes. As Andrew Quinlan lays out:

If the U.S. is the most important market for manufacturers seeking to recoup development costs, then it may sometimes make sense to leave the foreign markets altogether to avoid setting a low U.S. price. The revenues that would have come from those markets, even when suppressed by price controls, would then need to be made up for by charging U.S. customers even more.

A huge issue in the cost of medicines, as in other aspects of healthcare, is the utter lack of pricing transparency.

Medical care is one of the only areas where people are forced to wait weeks or even months to know what they are paying for and how much was charged. Without transparent pricing, there is no downward pressure from competition.

Also paramount in addressing pharmaceutical costs is ensuring that the United States keeps its place as the global leader in research and innovation. The American system of laws and intellectual property protections is a key component of what makes it palatable to invest billions of dollars in new medicines to begin with.

Addressing the dysfunction in the costs of medicine requires a deep look at government regulations that may be well meaning but are counterproductive. Lowering barriers to entry, increasing price transparency, and defending our leading role in medical innovation should all be top priorities.

Forcibly importing socialist schemes will only make the problems worse, and ultimately it will be patients who will suffer unnecessarily.

Mario H. Lopez is president of the Hispanic Leadership Fund, a nonpartisan advocacy organization dedicated to strengthening working families by promoting common-sense public policy solutions that advance liberty, opportunity and prosperity. He wrote this for InsideSources.com