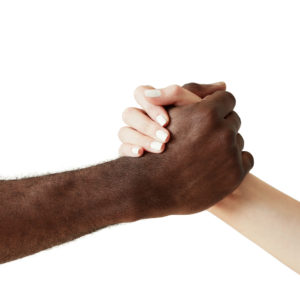 Thirteen times. After the “Great Society” War on Poverty programs instituted by President Lyndon Johnson in the 1960s, after the economic “empowerment zones” implemented in ghettos by President Richard Nixon in the 1970s and after tremendous post-recession job growth during President Barack Obama’s two-term administration, that’s the number that reverberates.

The topic was household median net wealth: According to a statistical data analysis conducted every three years by the Pew Research Center, white household net wealth in 2013 on average was $141,000. For black folk, the figure spiraled downward at a stunning pace to $11,000. And for Hispanic households, the figure was slightly better at $13,700.

“In an era that some call post-racial and after some hard-won civil rights legislation around housing, around financing and all kinds of reform, that might lead one to believe we’re in a steady state of regeneration. That hypothesis doesn’t fill any water,” said Tom Shapiro, a sociology and public policy professor at Brandeis University. He also is the author of the book “The Hidden Cost of Being African-American: How Wealth Perpetuates Inequality.”

The wealth numbers in this discussion undoubtedly painted a gloomy picture. Note that in 2010, the net wealth disparity between whites and blacks was eight times. So, the math is getting worse.

The racial wealth gap was the focus last week of an enlightening annual symposium in Washington titled “The State of Race in America,” the seventh such event held under the auspices of the Aspen Institute, a non-partisan think tank. While this year’s symposium was geared particularly toward the interplay of race and net wealth, the tentacles of the theme spread into subtopics, such as the housing wealth gap.

“Look at home ownership,” said Tanzina Vega, national reporter for race and inequality for CNNMoney. “If homes are owned by blacks, they are worth less than if they are owned by whites.”

Why, asked symposium moderator Richard Lui, an anchor for MSNBC.

“Partly racism,” answered Vega, who added that black workers with more experience and education still make less than their white counterparts. “Partly where people want to buy homes. We have to be honest about what’s happening in America. White flight is real; it continues to happen.”

However, there also is this new reverse flight phenomenon called gentrification occurring in major urban areas.

“We see the opposite of that (white flight) happening with gentrification,” Vega said, “where people in the inner city are being pushed out. New migration patterns are happening today, and that’s largely happening by wealthier whites.”

To further illustrate this issue of the housing wealth gap between whites and blacks, concerned citizens should read a brilliant and informative commentary in Forbes magazine written by Dorothy Brown, a tax law professor at Emory University. She discusses the housing wealth gap from the standpoint of the racial equilibrium in neighborhoods.

Her most compelling point: “Research shows that homes in majority black neighborhoods do not appreciate as much as homes in overwhelmingly white neighborhoods. This appreciation gap begins whenever a neighborhood is more than 10 percent black, and it increases right along with the percentage of black homeowners.”

Then, MSNBC’s Lui asked Omar Wasow, a professor of political science at Princeton University and co-founder of the black networking/culture website blackplanet.com: Is the wealth gap about race?

And there is the Tale of Two Cities regarding higher income vs. lower income households.

Rakesh Kochhar, the associate director of research at Pew who provided the analytics and statistics for the symposium, offered captivating detail of the so-called Top 25 Percent. Interestingly enough, if you take the Top 25 percent of the wealthiest white and black households in the United States, the racial groups level out on somewhat similar footing in several aspects of the net wealth dynamic.

Therefore, the divergence in net wealth based on racial groups tends to increase accordingly below that top level — as you descend to the second 25 percent, with the disparity margin even more sharply at the third 25 percent, down to the fourth and lowest 25 percent. The bottom 75 percent comprises the majority of this disturbing net wealth gap; and, of course, the bottom 25 percent widens into Grand Canyon territory.

But, as Kochhar explained, “Hispanic and black households derive a lot more of their wealth from their homes than whites do. When the housing market bubble burst (2005-2008), they were hit much harder than whites.”

Said Wasow, “We spend a lot of money on education and we still have terrible outcomes. I’m involved in the charter school movement. I think we need a lot more innovation in education. There is something fundamentally broken with the way our educational system is delivering education.”

Lui ended the panel with a question that required only a hand gesture, no words:

The wealth gap right now is bad; Will the wealth gap get better, get worse or stay the same in the next two years?

Two panelists pointed thumbs downward (meaning the gap will get worse); two panelists made a flat-line symbol with their hands (meaning it will stay about the same).

Doesn’t bode well for the next few years, does it. Those four gestures indicate 13 times or worse … for the foreseeable future.