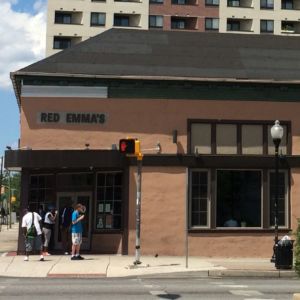 Where Does a Worker-Owned Collective Business Get a Loan?

Don’t try to ask for the manager at Red Emma’s in Baltimore. That’s because there isn’t one. The self-described “worker cooperative radical bookstore, vegan/vegetarian restaurant, and coffee roaster,” is proud of its radical and anarchist roots, as demonstrated by its organization as a non-hierarchical workers’ co-operative. All of this was fine, until it wanted to expand its roasting operation Thread Coffee, and discovered that most traditional banks didn’t want to draft loan paperwork including all of the shop’s 12 worker-owners. Instead, Red Emma’s turned to Working World, BRED, the Baltimore Roundtable for Economic Democracy. BRED is part of a new model of investment focused on supporting worker-owned and co-operative business models.

“In practice it looks a lot like patient capital,” says Kate Khatib, a co-founder of BRED, “because it is an investment that doesn’t come with an ownership stake.”

Instead, BRED offers loans with flexible terms that are tailored to fit the realities of different businesses. Although the goal of each loan is to get the business to sustainability such that it does not require an input of outside capital to remain afloat, BRED stresses that workers should always come first and that loan recipients don’t begin to pay back their loans until they are breaking even.

This is all part of the non-extractive model that is at BRED’s core.

BRED was formed to, as Khatib puts it, “develop a transformative model of investment that puts money into the service of community- and worker-led businesses in a way that understands that these businesses are going to have unique challenges and are going to need a different level of support.”

These challenges can be anything from drafting loan documents to include more than 20 different co-worker-owners, to helping someone with no business training formulate a business plan and draft paperwork requesting financing. BRED hosts several events throughout the year aimed at introducing Baltimore-area residents to co-operative business models. Those interested in applying for a loan through BRED then complete basic paperwork laying out the business plan and their loan needs.

“We try and make that as low-impact as possible, since the idea here is that we don’t want to discourage people who don’t have a lot of business experience from trying to move things forward,” says Khatib, “because if we do, that replicates the structures of exclusion that we are struggling to move beyond.”

BRED then works with the applicants to develop a business plan, offering planning support and other guidance.

Only a year old itself, BRED is part of The Financial Cooperative, a larger national network of local and regional cooperative loan funds supporting worker-owned and co-op businesses around the country. The nation-wide network allows groups to pool their funds and to share certain administrative costs. The loans that BRED has handed out so far have all come through the pooled resources of this national organization.

The larger financial commons also allows these groups to approach larger investors who have divested from traditional funds and to offer them better risk management, since loans are shared between the 12 member funds.

Thus far, BRED has been starting small and has primarily provided loans for the expansion of pre-existing businesses. Its first loan went to Taharka Brothers, a youth-led small-batch ice cream company. Through a small loan of less than $15,000 from BRED, Taharka Brothers was able to repair the ice cream truck it uses to sell its product, as well as create a business management position for a recent high school graduate, who helped the business position itself for growth. Khatib says that today Taharka Brothers is in the process of transitioning to worker-ownership.

Worker-ownership refers to the idea that the business itself is owned by the people who work in it. This ownership-driven  model is one of BRED’s core principles. The shared ownership model is also crucial to the operation of Red Emma’s, where worker-owners make many business decisions by vote.

When Red Emma’s wanted to expand its roasting operation, it wrestled with finding a loan institution that could work with its unorthodox ownership structure. It wound up turning to BRED, which provided a $30,000 loan.

“It’s simply that there is a bias towards certain forms of ownership,” he says. “Banks want to know who is the boss, where does the buck stop, and we aren’t set up that way.”

In that sense, Red Emma’s was different and didn’t want to compromise its founding principles to secure funding for an expansion.

Inclusion in financial decisions is part of the philosophy of expanding ownership and control to workers that both BRED and Red Emma’s share. As a private loan fund, BRED could draft paperwork to include all of Red Emma’s more than a dozen co-owners, something that the coffee shop and bookstore felt was essential, but which traditional banks had balked at.

The result was a non-traditional loan for a very unusual business–and the largest loan BRED has made to date. As the divestment movement gathers steam, the need for alternative investment options for socially-conscious individuals and organizations will grow. With many of them eschewing corporations as oppressive to workers, the environment, and marginalized groups, at least some of these investors will be exploring alternative options. As to what such a “non-extractive” institution would look like, go no further than Baltimore, and look for BRED, ice cream, and coffee.