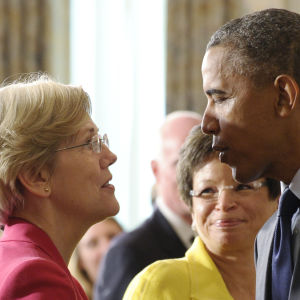 Why Elizabeth Warren Won’t Be Running for National Office

If you pine for liberal icon Senator Elizabeth Warren as a national candidate then please, absorb this message: It’s not going to happen. But that’s probably better for the cause to which you profess allegiance.

First it was Run Warren Run, the quixotic attempt to draft the Massachusetts Democrat to have a go at the White House that ended with a whimper earlier this year, but only after she finished toying with the media for months by saying she isn’t — present tense, mind you — running for president. Now she’s playing footsy about entering the veepstakes, the quadrennial ritual in which anything but a definitive “no” means “maybe” the vice presidency is possible. After all, Warren hasn’t flatly turned it down.

Prognosticators who see a door opening here are missing the point, even though Warren has made it repeatedly. Warren doesn’t believe in savior politics. Hillary Clinton disappointed Warren as a senator in 2001, and her disdain for what she sees as Obama’s too-cozy relationship with Wall Street is well-known. Warren tries to tell her bubbly liberal enthusiasts she’s not their panacea. They love hearing their heroine talk. They don’t seem nearly as fond of listening.

Whether on the campaign trail or at pep rallies for progressives, Warren harvests accolades when she mentions the Consumer Financial Protection Bureau, a creation of the 2010 Wall Street reform law whose basic idea the Harvard law professor devised. What does she emphasize? She’s apt to mention the painstaking work of organized labor, consumer advocates, retirees and anyone else she can think of. “We did it; the people did it,” she said on The Daily Show in April.

We are all used to heavily discounting the public utterances of politicians, and with good reason, but this line is a window into Warren’s thinking. Warren’s experience with Clinton and Obama taught her to attach more importance to the political context than the person, even if she happens to be that person. (Don’t confuse this cool-headed calculation for lack of ego, by the way. The “fancy-pants professor,” as her self-deprecating line goes, has more than a little ego.)

In the twilight of her husband’s administration, Hillary Clinton helped Warren, then a bankruptcy expert of increasing renown, kill off legislation aimed at making it harder for consumers to shed debts. Warren considered it a giveaway to credit card companies that wanted to keep debtors on the hook. First Lady Clinton agreed but months later Senator Clinton of New York backed a bill supported by the state’s most influential industry, finance, and it became law. When Barack Obama’s economic policy drifted under the influence of what Warren considered a group of Wall Street friendlies, she saw a big-picture version of her experience with Hillary. They both trimmed their sails to accommodate the system Warren thinks is rigged against the middle class. Clinton wasn’t a savior, nor was Obama.

A rare victory was the creation of the consumer bureau in 2010, which was only possible, in the Warren view, because mass popular outrage at Wall Street abuses and a searing recession got channeled into the political process in an organized manner. There was a political price to pay for abandoning the effort, as Democratic interest groups never failed to remind wavering lawmakers. They weren’t hostage to anyone’s leadership, least of all a savior who might abandon them.

This conviction of Warren’s sheds light on her approach to being a senator. She doesn’t spend a lot of time looking for deals she can cut in the cloakrooms. Why would you if you watched a system you loathe co-opt Obama and Clinton? Instead, you run an outsider’s campaign against your preferred villains, notably big banks, from your Senate perch in televised committee hearings or floor debates. You use the attention to build mailing lists. You push back against nominees you don’t like. You gird yourself for short-term losses in hopes of long-term wins.

Liberals who wanted to see Warren run for president, and those who nurse fantasies of a veep slot for her should learn to hear her coy initial responses for what they are, namely tactics. Like the Senate speeches, the calculated responses to the presidential questions keeps her agenda — bust Wall Street down to size, revitalize government’s role in promoting social change — in the spotlight. Actually running for national office would expose Warren to the criticism that it is all about her — the savior figure she doesn’t want to be — and not reviving liberalism more broadly. Holding that office, in the Warren view, would be even worse, forcing her into compromises before a more vibrant progressive movement takes root.

Like many progressives, Warren believes she’s working to build a movement that’s finally on the rise, 30 years after Ronald Reagan “changed the trajectory of America,” in Obama’s memorable words. If liberals really care about the movement, they should pass on the Warren worship and tackle the hard work of politics. Warren has dropped the hint repeatedly. Her admirers need to pick it up.