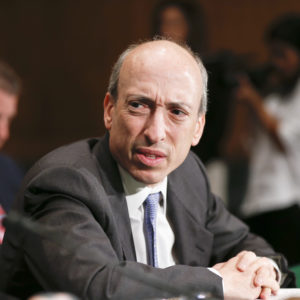 A new progressive pressure group with millions of followers inspired by erstwhile presidential candidate Bernie Sanders may support the appointment of a prominent veteran of Goldman Sachs to a leadership role in a Hillary Clinton administration, the group’s founding director said.

Jeff Weaver, who ran the Vermont senator’s insurgent campaign for the Democratic nomination for president, said the new organization, Our Revolution, hasn’t ruled out backing Gary Gensler, a former banker and regulator whom Sanders harshly criticized during his primary campaign.

Gensler, who is now the chief financial officer of the Clinton campaign, “has done some better work” since his 18 years at Goldman Sachs, Weaver said. Our Revolution, he added, will look at the “overall team” that a President Hillary Clinton might appoint and work with other liberal groups.

“I’m not prepared to say Gensler is in or out,” Weaver told InsideSources. “We are working in a coalition with other people.”

The intrigue around whether Gensler could ascend to a top job in a Clinton administration testifies to how assiduously progressive Democrats are mobilizing to cement their influence on the nomination process but how politically fraught it may be. Though Gensler is only one person, he’s tight with both Clinton and some liberal Democrats, but not Sanders. At the same time, Sanders acolytes are vowing to drag any differences they do have into full public view.

“We can bring these issues to the grassroots across the country,” Weaver said. “This appointments process will not be an insider game.”

Gensler, 59, has achieved the rare feat of winning the confidence of both Hillary Clinton and progressive firebrand Sen. Elizabeth Warren, two Democrats who have eyed each other warily for years. The Massachusetts senator hit the campaign trail on Clinton’s behalf after she clinched the nomination, but is sure to push her own agenda after the election.

Sanders, the independent Vermont senator, has never warmed to Gensler in the manner that Warren has.

The former Goldman banker Gensler worked at the Treasury Department under President Bill Clinton but earned his stripes as a reformer while head of the Commodity Futures Trading Commission from 2009 to 2014.

There, he helped drive the adoption of the Dodd-Frank Act of 2010, which overhauled financial regulation and empowered Gensler’s agency to oversee the market for unregulated derivatives, known commonly as swaps. This opaque market, with trillions in notional value, provided fat profit margins to Wall Street firms before the 2008 financial crisis, and Gensler’s moves to bring transparency to it earned him the enmity of his former colleagues.

Gensler’s name, a Republican regulator once said, “is like a curse word” on Wall Street. “I’ve never seen anything like it.”

This willingness to turn on the industry that made him wealthy won Gensler accolades from Warren, who as a Harvard law professor pushed for the creation of a new consumer regulator in Dodd-Frank.

But Sanders never warmed to Gensler, whose nomination to the derivatives regulator the Vermont senator opposed. He also got into a public spat with Gensler over a 2011 regulation that Sanders said didn’t do enough to curb crude oil speculation. During the campaign, when Gensler publicly criticized Sanders’ financial regulation plans, the candidate’s spokesman hit back hard.

“Sen. Sanders won’t be taking advice on how to regulate Wall Street from a former Goldman Sachs partner and a former Treasury Department official who helped Wall Street rig the system,” said the spokesman, Michael Briggs.

Plenty of liberal interest groups appreciate Gensler’s work on financial regulation and are willing to look past his background at Goldman and the Treasury, said Lisa Gilbert, director of Congress Watch, a division of Public Citizen.

“Gensler is a good reminder for the ‘personnel is policy’ mantra that it’s not solely about industry ties,” Gilbert said. “It’s about perspectives on policy.”

Now that the Sanders-inspired Our Revolution is up and running, the senator’s acolytes could find themselves helping to install a team in a new Clinton administration that includes Gensler.

Our Revolution Gets Going

After a period of initial turmoil in which a group of staffers quit in response to Weaver’s appointment, Our Revolution has about 12 staff members, and is still focused on the November election, he said. But with “more than 5 million people” on its email list, Weaver said the group will pivot to the appointments question soon after, assuming Clinton wins.

“We can generate thousands, maybe tens of thousands, of phone calls,” he said. “We have the capacity to mobilize people on a scale you’ve never really seen.”
Weaver emphasized that Our Revolution would take the Democratic platform, which the Sanders campaign turned into a policy battleground, as the blueprint for Clinton’s would-be administration. Appointees, he said, need to appreciate the importance of this usually irrelevant campaign document.

“There’s a greater awareness this time around of making sure we get the right people in the positions who are willing to carry out the Democratic platform,” Weaver said.

Aside from tough rhetoric about Wall Street and finance in general, the platform also calls for defending or implementing specific policies. A notable one is the financial transactions tax, which Sanders forced onto the Democratic agenda. The tax could apply to a subset of financial transactions on forms of computer-driven trading, or a broader set of instruments like stocks, bonds and derivatives.

Strengthen Warren’s Hand
Our Revolution is similar in concept to Organizing for America, an offshoot of President Barack Obama’s campaign that never got traction as a major player in grassroots politics outside of efforts to put and keep the nation’s first black president in office. Progressive activists are hoping that Sanders, who abjured an interest in anything but his issues during the campaign, can leave behind a more vibrant machine.

“Obama ran as an individual embodiment of aspirations, not an ideological campaign, so the hope is that since Sanders ran an issue-based campaign, you have an institutional encapsulation of that in Our Revolution,” one progressive activist said.

In the treacherous, shifting sands of presidential appointment politics, Our Revolution could also end up being a foil of sorts for Warren, who’s promised to take a tough look at any Clinton appointees, according to one person close to Sanders. If she can point to the group as one more reason why Clinton can’t tilt toward Wall Street, it will strengthen her own hand.

“I don’t think anyone sees Our Revolution as a flanking maneuver around Warren,” Gilbert said. “People are fairly in sync.”