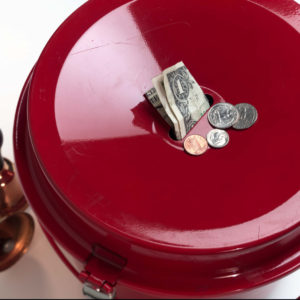 Season for Giving to Religious Groups

It’s Christmas time. And according to the National Retail Federation, Americans are on pace to spend a record amount of money on holiday gifts this year, $465 billion or an average or $700 a person. But as Americans spend billions of dollars on toys and goodies for one another, they are also expected to donate a record amount to charity this year, surpassing the previous record of $410.02 billion given to charitable organizations in 2017.

Leading the way in generosity are America’s religious communities. In fact, a 2017 study from the Institute on Faith & Giving found that religiously affiliated individuals were more than two times as generous as those who did not belong to a religious community. Among those who identify as religious and attend weekly worship services, the percentage is even higher. According to last year’s report, 62 percent of religious households gave to charity compared with 46 percent of nonreligious households.

Given these statistics it is not surprising that historically religious groups have received the largest share of charitable donations. Of the $410.02 billion given in charitable donations, $127.37 billion (31 percent of total donations) went to religious organizations (a 2.7 percent increase over the previous year). Education came in second with $58.9 billion.

The overall size and scope of religious giving is a testimony to the generous spirit of believers. But beyond indicating an underlying philanthropic impulse, what do these trends in charitable giving reveal about the givers themselves?

First, believers, like unbelievers, give because they share the vision and convictions of the institutions they give to. However, in many devout communities, theology is the motivating factor. This is because the faithful believe that man’s eternal destiny hinges on having a right relationship with God and that subscription to a set of beliefs is part of this relationship. Thus, because right belief is essential for salvation, believers give in order to spread their beliefs further.

An example of this motivation in action is the Southern Baptist Convention, the largest Protestant denomination in the world that includes 47,000 churches and 15 million members. Last year, Southern Baptists gave $9.1 billion to their local congregations. While the bulk of this money stays with the local churches and state conventions, Southern Baptists contributed $192 million to their national convention budget. Out of this total, $140 million was allocated for world missions, $42 million for theological education, and $3.1 million for political and cultural engagement.

By designating 73 percent of their national budget to world missions in 2017-18, Southern Baptists demonstrated their commitment to spreading the news of the gospel and reaching those in difficult places. While other priorities such as political engagement, disaster relief, theological education, and campus ministry received attention, the overwhelming percentage of funds was distributed among 3,667 full-time overseas missionaries and 5,262 domestic missionaries.

Theological motivations, specifically concern for another’s eternal destiny, motivate religiously minded givers to give sacrificially and generously because they want to see souls saved and the mission of the institutions they support advanced.

Another factor that influences the discrepancy in charitable giving between religious and non-religious people is fundamental differences in eschatology (the field of study concerned with the end-times). Inherently, the secular worldview is oriented to the temporal and material. Of course, religious people aren’t immune to the allure of money and possessions and non-religious people can be quite generous. But overall, if one’s eschatology is rooted in a materialistic worldview it is more difficult to think beyond man’s fleeting, temporary existence. If tomorrow we die, then why not “eat, drink and be merry”?

Jesus himself addressed this mindset in the parable of the rich fool (Luke 12:13-21). In the story, Jesus describes a man with an abundance of possessions. The man owns so much stuff that he runs out of room to store it. Rather than be content with what he has, he decides to build bigger barns, so he can accumulate more. Jesus indicts this greedy mindset by saying, “Fool! This night your soul is required of you, and the things you have prepared, whose will they be?” The spiritual lesson is the folly of laying up treasure for one’s self and being stingy toward God.

Believers from most faith traditions hold a similar outlook toward their possessions; while not inherently evil, property should be stewarded in a way that serves and blesses others in addition to the owner. This others-oriented approach is a hallmark of religion and a motivating factor behind much faith-based charitable giving.

David Closson serves as the research fellow for Religious Freedom and Biblical Worldview at Family Research Council. He wrote this for InsideSources.com.