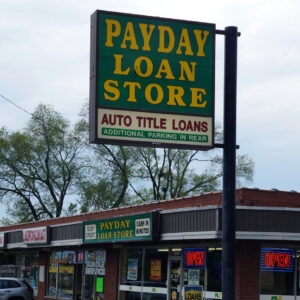 Which is more expensive for low-credit consumers — the daily cost of a short-term loan or a bank overdraft fee? The answer may surprise you.

Short-term loans continue to receive a bad rap within American political discourse and are routinely regarded as predatory by lawmakers who think they unfairly target low-income Americans. These lawmakers, at the federal and state level, argue that short-term lenders take advantage of vulnerable Americans by offering high-interest loans that they cannot afford to repay. Therefore, they conclude that strong consumer protections are needed to curtail these unsavory business practices. Strangely, these same legislators frequently have little to say about bank overdraft fees and a much larger burden on consumers.

Over the last decade, 19 states have passed laws and regulations requiring interest rate caps on small-dollar loans. Pressure for action at the federal level has also been growing. Last year, several senators proposed a law establishing a 36 percent annual percentage rate cap on short-term loans, effectively banning all loans with an interest rate greater than 36 percent.

Such a proposal, if enacted, would prove devastating to short-term lenders who rely on the ability to adjust interest rates to insulate them from high-risk consumers. Research suggests that high-interest rates are frequently necessary to recoup the cost of loan delinquency and generate even the slimmest of profits. Losing this flexibility has repeatedly led businesses to exit the market in states like Illinois, where a 36 percent rate cap was established.

A national interest rate cap would be even more harmful to consumers. This is because the 12 million Americans, or 5.5 percent of the population, who use short-term loans, tend to be unbanked or underbanked. These Americans either lack access to credit at traditional financial institutions or possess limited access to borrowing from other lenders. In either case, these Americans rely on alternative forms of credit only available to them from short-term lenders.

Unlike the strict regulations imposed on short-term lenders, many large banks face few restrictions on the practice of generating profit from overdraft fees. Overdraft fees, which the bank imposes on customers who withdraw more money from their accounts than they possess, are a significant revenue generator for banks. According to the Consumer Financial Protection Bureau, overdraft fees and non-sufficient fee revenue account for “close to two-thirds of reported fee revenue.” In 2021, consumers paid more than $8 billion in overdraft fees.

Unfortunately, according to the Federal Reserve, this revenue is frequently collected from Americans who are more likely to be “adults with lower income, adults with less education, and Black and Hispanic adults.” In fact, research from the CFPB has found that “8 percent of customers incur nearly 75 percent of all overdraft fees,” meaning those Americans who can least afford to make such payments are responsible for a disproportionate share of overdrafts.

A brief comparison between a typical short-term loan and a standard overdraft fee illustrates the absurdity of focusing on strict rate caps for payday lenders when banks continue to charge stiff overdraft fees.

For instance, a 36 percent annual percentage rate cap applied to a two-week loan on $200 amounts to a consumer charge of just 0.6 percent per day for the loan. In contrast, a number of large banks charge a $36 overdraft fee, which translates to a one-day effective rate of 18 percent. To summarize, we see a short-term loan with a 36 percent annual percentage rate and a bank overdraft fee with an annual rate of 915 percent.

This example demonstrates the enormous disparity in accumulated profits between a typical short-term loan and a standard overdraft fee. Yet, lawmakers seem intent on applying disproportional scrutiny toward payday lenders and denying high-risk consumers access to short-term credit.

Indeed, according to a 2016 report by the polling firm Tarrance Group, 96 percent of borrowers said that “the payday loans they have taken out have been useful to them personally.” In addition, a 2020 Morning Consult survey found that a strong majority of Americans think the “amount lenders should be able to charge for a two-week loan of $100” should exceed the 36 percent cap proposed by Congress.

The reality is that payday lenders provide unbanked and underbanked Americans with a valuable service, and lawmakers are threatening to take that away. Americans who would otherwise not be eligible to receive a line of credit, many of them low-income and people of color, can do so with a small-dollar loan. This small-dollar loan may be all that stands in the way between a family being able to pay their next month’s rent or being evicted.

Legislators should resist the urge to pass caps on payday loans, which will only punish the very people the law in question was designed to help. Such a regressive law would almost certainly push consumers to pursue alternative, far riskier, forms of credit such as those available at shady loan sharks and pawnshops.

Instead, lawmakers should focus on the large banks that continue to enrich themselves at the expense of their poorest customers. It is overdraft fees, not payday loans, that penalize low-income Americans for not having enough money in their bank accounts. And it is overdraft fees that consistently price people out of banking.

Nate Scherer is a policy analyst with the American Consumer Institute. He wrote this for InsideSources.com.