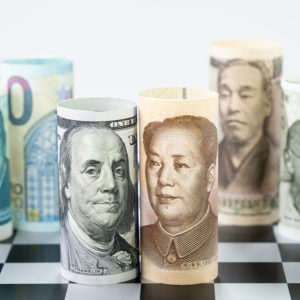 Sleepwalking Toward a Currency War?

Nobody can know with any degree of certainty whether we are headed soon to a destructive world currency war in which countries compete with to weaken their exchange rates to gain an unfair competitive advantage.

However, what we can be sure about is that there is an increasing cause for concern that we may be sleepwalking toward such an eventuality. This is particularly the case at a time that the benefits of globalization are being increasingly questioned. It is also the case at a time that the United States is abrogating its leadership role in maintaining an open international economic order.

A principal reason for concern is that the Trump administration’s economic policy actions appear to be in serious conflict with its external policy objectives. The clear and present danger is that when its external policy objectives are not met, the administration might double down on its protectionist America First trade policy and might respond in kind to what it perceives to be Chinese and European exchange rate manipulation.

While the Trump administration would like to eliminate the trade deficit and weaken the dollar, its pursuit of an expansionary budget policy at this late stage in the economic cycle highly complicates the attainment of those objectives. By reducing national savings, higher budget deficits are leading to the re-emergence of a twin budget deficit and trade deficit problem.

At the same time, the higher U.S. budget deficit is putting upward pressure on the dollar by forcing the Federal Reserve to maintain interest rates at a higher level than would otherwise be the case. An American First trade policy is also exerting unwanted upward pressure on the U.S. dollar. It is doing so by heightening economic uncertainty abroad, which is forcing foreign central banks to loosen their monetary policy stance. It is also doing so by unsettling global financial markets thereby increasing the U.S. dollar’s safe-haven demand.

It has to be of concern that both the U.S. trade deficit and the U.S. dollar are already moving in the opposite direction than that desired by the Trump administration. While President Trump repeatedly promises to eliminate the U.S. trade deficit, that deficit has increased by around 25 percent since he assumed office. At the same time, while Trump keeps arguing in favor of a weak dollar, the dollar has kept increasing in value over the past year.

Further heightening the chances of a world currency war is the very real risk that Boris Johnson, who will soon become the United Kingdom’s prime minister, might carry through on his threat to have the United Kingdom crash out of Europe on October 31 without a deal. Were that to occur, the pound would almost certainly suffer a sharp depreciation. That, in turn, must be expected to drag down the euro and in the process further heighten economic tensions between Europe and the United States.

A more serious, though less imminent, risk for world currency stability would be a recurrence of the Italian sovereign debt crisis in the context of a weakening European economy. Being 10 times the size of the Greek economy and having a public debt 10 times that of Greece, Italy would put considerable strain on the European banking system. It would also pose an existential threat to the euro that would almost certainly propel the U.S. dollar higher.

Needless to add, it does not help matters that the United States now views China more as a strategic rival rather than as a trustworthy economic partner. That is inducing the United States to intensify trade restrictions on China, which leaves Chinese policymakers little alternative but to resort to monetary policy easing and currency weakness to support their flagging economy. That in turn only reinforces the U.S. perception that China is resorting to currency manipulation to obtain an unfair competitive advantage.

With all of these risks to the global economic order, there has seldom been as much need as there is today for responsible U.S. international economic leadership to prevent a destructive currency war. However, on the basis of the Trump administration’s international economic policies to date, I am not holding my breath for that to happen.