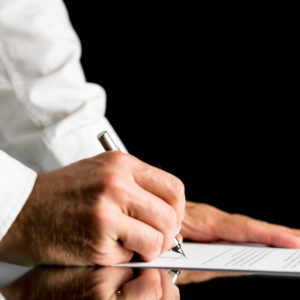 Step Away From the Pen, Mr. Cordray

Posted to Finance November 28, 2016 by Brian Knight and Michael Wilt

The Consumer Financial Protection Bureau is an agency that was born into controversy and remains polarizing. Recently, the U.S. Court of Appeals for the District of Colombia declared the bureau’s original structure of one director, unable to be removed without cause, unconstitutional. In light of this rebuke, and the desire from voters for a change from the status quo, the bureau should abstain from rushing regulations before the new president takes office.

As a new administration prepares to take over the reins of government, federal agencies sometimes seek to adopt last-minute regulations. These so-called “midnight regulations” are often rushed through the regulatory process and are supported by lower quality analysis of the costs and benefits. Given the effect the bureau’s regulation could have on the financial wellbeing of millions of Americans, the CFPB should act in good faith and take the time to give the public’s comments on bureau rule makings the weight and consideration they deserve.

For example, the proposed rules on arbitration and payday lending have sparked great public interest. The payday rule has received 1.4 million comments. These comments range from letters containing extensive economic and legal analysis to personal stories from people terrified of losing access to critical products and services. Many of these comments are from consumers of these products, the very people the bureau was established to protect, concerned about how the CFPB will negatively affect their lives.

The CFPB needs time to consider carefully and respond to valid concerns raised by commenters. To go through the 1.4 million comments in the time remaining before the new administration takes over, the CFPB staff would need to work around the clock and read, review and internalize approximately 850 comments per hour. Reviewing the comments on the arbitration rule would take additional time. The CFPB’s proposed rules on payday lending and arbitration would affect substantial change in financial services markets, affecting millions of consumers and their access to credit. It is not too much to ask that the CFPB give these important rules the time and attention they deserve.

The bureau should exercise restraint not only out of a desire to get the rules right but also out of concern for its legitimacy. As originally structured, the CFPB lacked accountability to Congress and the president. A recent federal appeals court decision held the CFPB’s structure as an independent agency with a single, independent director to be unconstitutional. As the court noted, “Other than the president, the director of the CFPB is the single most powerful official in the entire United States government.”

Accordingly, in the interest of legitimacy, the CFPB should avoid overly aggressive action until the new president is able to decide who he wants as director. There is tremendous uncertainty about the future of the CFPB, so any contentious new rules enacted in the waning days of the outgoing administration would likely be viewed as illegitimate attempts to dictate policy for the new administration. This may lead to the rules being overturned, causing uncertainty in the industry.

Rather than subjecting the financial industry to whipsaw policy, the CFPB and its director should step away from the pen. Instead, the bureau should spend its time working through the information it has received in response to its proposals so that the new administration can make informed decisions. The broad goals of the CFPB — to protect consumers and encourage access and innovation in financial products — remain unchanged, and the best way for the CFPB to advance those goals is to wait until after the inauguration to finalize policy.