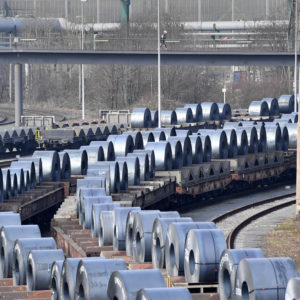 Tariffs have pushed waves of economic uncertainty throughout the financial sector. Stocks tumbled last week with President Trump floating the idea of $100 billion in additional tariffs on Chinese-made goods. That tariff proposal follows up the president’s already-implemented tariffs on solar panels, steel and aluminum.

Tariffs are taxes targeting some or all imported goods. They can be implemented for a variety of reasons, usually in an attempt to support domestic production or to ensure national security. Trump’s tariffs tax foreign steel at 25 percent and foreign aluminum at 10 percent. The president implemented the tariff with the goal of revitalizing the American steel industry.

His action shouldn’t come as a shock to Republicans or to anyone else — it was one of his major promises on the 2016 campaign trail. While supporting American industry may sound good taken at face value, trade protectionism actually harms American consumers — and their losses far outweigh any gains for U.S. steel producers and the people they employ.

No one loses from a voluntary exchange. The only reason that trade happens, to begin with, is because it is mutually beneficial. We export goods when we can produce them more cheaply than our trading partners can; we import goods when other countries can produce them at a lower cost than we can at home. Consumers on both sides of international borders are then able to buy more goods at lower prices than otherwise.

The reason that the steel industry has moved overseas is that it costs too much to produce here. Domestic manufacturers have been unable to supply steel at prices that are competitive with international rivals. Failure to pass a market test is why the major steel cities of yesteryear have declined and other economic activities have arisen to take steel’s place. A great example of that process is Pittsburgh, which has gone from being a center of steel production to a city focused on health care and high-tech jobs.

Steel typically is bought as a raw material and used to produce everything from automobiles to refrigerators. When international steel producers rose to dominate the global steel industry, steel prices dropped. When companies that use steel as an input can buy it for less, they pass some of the savings on to their customers in the form of lower prices. As the prices of steel-using consumer goods decline, people have more money in their pockets, and they begin to buy more of other things. As the demands for other goods rise, suppliers respond by expanding production and hiring more workers.

Trump already is hurting blue-collar Americans by raising tariffs. The American Keg Company, in Pottstown, Pennsylvania, is the last remaining American keg maker. The company’s workers initially were enthusiastic because they thought that the new tariffs would allow their employer to prosper. However, the company’s owner, Scott Bentley, states that he is “horrified” by the tariff because the anticipated increase in steel prices will make the enterprise unsustainable. With an increase in the price of a raw material like steel, small American businesses are going to suffer and more blue-collar workers are going to lose their jobs.

The important takeaway is that the economic growth spurred by lower steel prices creates more domestic jobs than it kills in the steel industry.

Trump is not the first politician to impose steel tariffs. In 2002, George W. Bush approved a steel tariff in a similar attempt to revive the steel industry. At the time, about 187,500 American were employed by domestic steel producers. That being said, more than 200,000 jobs disappeared in other industries that were directly attributable to the tariff.

China recently announced new retaliatory tariffs on U.S. goods — worth an estimated $3 billion. Both Canada and the European Union have said they will also retaliate against U.S tariffs by raising duties on American goods. Brazil and Mexico are considering countermeasures as well. If that happens, Chad Brown at the Peterson Institute for International Economics predicts that retaliation could cost American consumers billions of dollars in higher import prices.

Of course, Trump may have had motives for wanting to impose a tariff on steel other than making the U.S. steel industry great again. Americans who felt left behind by technological progress and globalization were one of his key voting constituencies in November 2016. As a protectionist tariff becomes effective, more people will find steel industry jobs and U.S. steel companies will become more profitable. The beneficiaries of a revitalized steel industry will credit Trump for their gains, making them more likely to vote for him again in November 2020.

Because of steel’s higher domestic prices, however, manufacturers of steel-using goods will be forced to scale back production and downsize their workforces. Trump’s steel tariff could turn out to be a clever political move, if not an economically-wise one — especially if the owners and employees of the companies that are hurt by the tariff don’t blame the president for their plight.

That’s unlikely, though. George W. Bush’s own steel tariff of 2002 was short-lived because of the opposition it quickly drew from domestic automobile and household appliance manufacturers.

Economic change is disruptive and can be difficult for some to overcome, but that is part of the price paid for economic progress. Because they artificially prop up inefficient producers, thereby “creating” the wrong jobs, tariffs and other forms of trade protectionism only delay the inevitable restructuring and do considerable economic damage in the interim.

Economists have known since 1776 that unfettered trade promotes the wealth of nations. Let’s hope that domestic steel-using industries can — once again — remind the president of the United States of that fact.