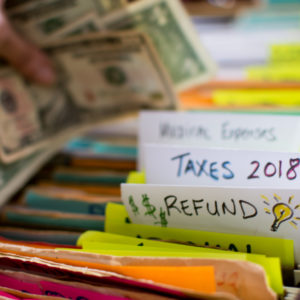 On Tax Day, the Payers vs. the Takers

Tax time is here again, but while almost 100 percent of households will be filing their federal taxes, only about 40 percent will actually pay any. According to the Congressional Budget Office, 60 percent of U.S. households actually receive more money from the federal government than they pay in all federal taxes combined.

This sobering statistic draws a huge question mark over the oft-repeated claim that the rich don’t “pay their fair share,” because as it stands, the poor and middle-class pay less than nothing when both taxes and transfers are considered.

Transfers are the other side of the tax coin: money households receive from the government through programs like the earned income tax credit, Social Security, income assistance and various welfare supports. They are, in effect, negative taxes by which the government hands people money instead of taking it away.

But when we account for transfers, the average household among the poorest 20 percent actually experiences a negative federal tax rate — receiving $9,600 in transfers while paying only $800 in taxes, for a minus 56 percent effective tax rate.

Even the average middle-class household receives more back from the federal government ($16,700) than it pays in taxes ($8,900). Accounting for both taxes and transfers, only 40 percent of households are net payers in the end, which is why every proposed tax cut is met with the charge that it is one more “tax cut for the rich.” When only the richest 40 percent of households are net payers, by definition, every tax cut is a tax cut for the rich.

None of this is news to the politicians who fiddle endlessly with the tax code. If they can convince voters that the rich aren’t paying their fair share, politicians are then in the clear to tweak the U.S. tax code. And tweak it they do, always toward the same end: buying votes. Politicians have made the tax code so progressive that a near super-majority of Americans actually benefit from increased taxation.

Politicians promise all sorts of largesse in exchange for votes. Once elected, they ratchet up taxes on the 40 percent of net payers and dole out benefits to the 60 percent of net receivers.

This explains why both major parties have become such fans of big government. Bigger government means more taxes. More taxes means more money to dole out to voters in the form of one new program after another. More handouts for voters mean more votes for politicians who deliver the handouts. And the government grows year over year, regardless of which party finds itself in power.

The real question that taxpayers should be asking this tax season is a simple one: What percentage of the American public should be exempt from paying any federal tax at all? Because anyone truly concerned about people paying their fair share would likely not answer, “60 percent.”