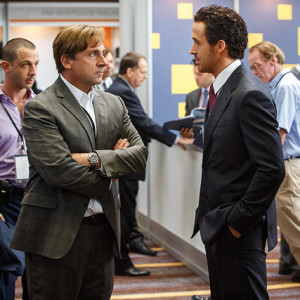 Steve Carell and Ryan Gosling in "The Big Short."
[IS] Opinions

The arrival of The Big Short in theaters a few weeks ago has reignited interest in the causes of the 2008 financial crisis. If you believe that the crisis was caused by greed and recklessness on Wall Street then you’ll like this film. Paul Krugman, writing on the op-ed page of the New York Times, liked it immensely, apparently thinking a Hollywood version of reality was fact.

We can all agree that the financial crisis was caused by a “mortgage meltdown” mostly among subprime and other risky mortgages. What neither this film nor the greed narrative tells us, is why there were so many of these mortgages in the financial system to begin with. The answer: Sorry Dr. Krugman, it was not Wall Street.

In June 2008, just before the crisis, more than half of all US mortgages—31 million loans—were subprime or otherwise risky. Of these, 76 percent were on the books of government agencies, primarily the government-sponsored enterprises (GSEs) Fannie Mae and Freddie Mac. This shows, without question, that the government—a sophisticated buyer—created the demand for these deficient loans.

The remaining 24 percent of these loans were on the books of private sector entities, such as banks, investment banks, insurers, and investment funds of all kinds.

Because of their government backing, Fannie and Freddie were the dominant players in the US mortgage market, and had been for more than a quarter century. They did not make loans themselves, but acquired mortgages from banks and other lenders. These were held in their portfolios or sold off to investors with a GSE guarantee.

Significantly, before 1992, Fannie and Freddie accepted only prime mortgages—loans in which the borrower made a down payment of 10 to 20 percent, had a FICO credit score of at least 660, and debts that were less than 38 percent of income after the loan was closed.

The market was stable with this foundation, but despite many government subsidies the homeownership rate in the U.S. had been stalled at 64 percent for 30 years. Congress blamed this on the GSEs, particularly their refusal to relax their underwriting standards; by insisting on acquiring only prime loans—it was argued—the GSEs left a vast number of low income Americans frozen out of the American dream of homeownership.

Thus, in 1992, Congress adopted a program known as the affordable housing goals, which required Fannie and Freddie to acquire an annual quota of loans that had been made to low or moderate income borrowers. Initially, 30 percent of all loans the GSEs acquired in any year had to be made to home buyers who were at or below the median income where they lived. Various subordinate goals were also required, covering minorities and borrowers below 80 and 60 percent of median income.

The Department of Housing and Urban Development was given authority to raise the goals—and it did, aggressively. Between 1993 and 2000, HUD raised the 30 percent goals to 50 percent, and between 2001 and 2008 it raised the goals to 56 percent. Thus, by 2008, 56 percent of all mortgages the GSEs acquired had to be made to borrowers below median income. Notably, HUD’s relentlessly rising quotas occurred in both Democratic and Republican administrations.

Understandably, it was difficult for the GSEs to meet these quotas and still acquire only prime loans. Accordingly, between 1993 and 2008, they began to accept increasing numbers of subprime and other risky mortgages. These caused their insolvency in 2008 and their takeover by the government that year. Fannie later reported that in 2008 it was exposed to $878 billion in these deficient mortgages, which caused 81percent of its losses that year. Freddie’s percentage exposures and losses were proportionately the same.

The connection between these numbers and the financial crisis is unavoidable. Because the GSEs dominated the mortgage market, when they reduced their underwriting standards to meet the affordable housing quotas the rest of the market followed. Soon, borrowers who could have afforded prime mortgages were getting loans with zero down payments. The result was an enormous housing price bubble, the largest in U.S. history, and when the bubble began to deflate, borrowers who could not meet their mortgage obligations were unable to refinance their loans. The number of defaults was unprecedented. This was the mortgage meltdown.

Government blunders turned it into a financial crisis. First, the government rescued Bear Stearns, a Wall Street investment bank, in March 2008, creating expectations that it would rescue other big firms if they got into trouble. But when Lehman Brothers—a firm much larger than Bear—weakened, the government suddenly reversed its policy, letting Lehman fail. This upended the market’s expectations, creating doubt about the safety and soundness of every firm. The result was an unprecedented panic that we know today as the financial crisis.

This is not the kind of story that Hollywood likes—no greed, no evildoers, not even any humor—just very bad government policy combined with serial government blunders. We should see the “greed narrative” for what it is: first, an effort to support the enactment of another bad policy—the job-destroying Dodd-Frank Act—and then to keep it fully in force. The Big Short is entertainment, not the truth.

Peter J. Wallison is the Arthur F. Burns fellow at the American Enterprise Institute. His latest book is “Hidden In Plain Sight: What Caused the World’s Worst Financial Crisis and Why It Could Happen Again” (Encounter, 2015).