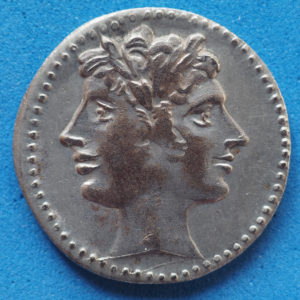 A dark secret of economics is that there’s no general agreement on why money works. Why, for example, does practically everyone in the world exchange things of great and small value for greenish cotton-linen rectangles bearing the words “Federal Reserve Note … United States of America” on a dollar bill?

Recently, I added a few coins with curious histories to my modest collection, leading to a podcast interview by my Mercatus Center colleague and monetary expert David Beckworth on a “Monetary History of Small Coins.” A few highlights of that discussion include: a Roman coin from the reign of Diocletian (A.D. 284-305), an English groat (fourpence piece) from the reign of Henry VII (1485-1509), and several oddball American pieces that sprang up during 19th century coin shortages.

Economics aside, numismatics (the study of coins and currency) has a romantic side. My Diocletian piece traveled for 1,700 years before reaching me. Who, I wonder, owned it during those centuries, and what did they buy with it?

Romance aside, fourth-century Roman coinage offers cautionary tales for 21st-century lawmakers. The value of Roman coins stemmed from their precious metal content — silver, bronze and so forth. Leading up to Diocletian, Roman authorities had debased the currency little by little by diminishing the metallic value of each coin. This way, they could use less silver, for example, to make more coins to fund the Empire. Merchants demanded more and more of the cheapened coins for their goods and services.

Like so many rulers then and now, Diocletian blamed this inflation on greedy merchants, profiteers, speculators. In A.D. 301, he issued his Edict on Maximum Prices, imposing price limits on more than 1,000 goods. Any merchants who charged more and the consumers who paid those inflated prices could both receive the death penalty. Supply and demand, however, proved mightier than Diocletian’s threats. Romans largely ignored the Edict, and inflation continued.

Henry VII’s groat (fourpence) represents something of the opposite story. This piece, dating from the late 1400s, was nearly identical to one first issued under Edward III (1351). Other than the monarch’s name, the design and metallic content remained virtually unchanged through eight more kings, including Henry VII. Currency stability played a significant role in England’s rise from a small island on the edge of civilization to history’s most extensive empire. Henry VIII’s “Great Debasement” was an exception, earning him, for amusing reasons, the sobriquet “Old Coppernose.”

Nowadays, U.S. coins have negligible metallic value, and U.S. currency doesn’t promise the bearer gold, silver or anything else. The source of its value is debated by monetary theorists. But 20th-century experience demonstrates that the excessive production of fiat money leads to inflation. Yet in 2019, political actors tout grand spending programs to be financed by the indiscriminate production of new money. This view finds support among a relatively small academic cadre promoting “Modern Monetary Theory.”

Finally, the oddball pieces: Several times in American history, small coins became scarce, leaving Americans struggling to manage small transactions. Shortages usually occurred when inflation made the metallic value of coins more valuable than the face value. During the Civil War, for example, war finance and military demand for metal made melted American coins more valuable than the denominations stamped on unmelted pieces. (Many were hidden rather than melted.)

If you were trying to get through life, your smallest change might have been a one-dollar bill — worth close to $25 in today’s money. If you needed a loaf of bread or a streetcar ride, too bad. You wouldn’t have the change, and neither would the baker nor the driver. A variety of alternatives to coins sprang up. Postage stamps were encased in disks and used as coins. Stores issued metal or wooden tokens promising, say, “5¢ in trade.” And most curiously, privately issued Civil War tokens resembling pennies appeared, bearing patriotic slogans like “Union Forever.” Civil War tokens, like today’s U.S. currency, promised nothing to bearers, but were nonetheless widely accepted until they were outlawed.

In a sense, these coinage substitutes were the prepaid gift cards or Bitcoin of the 19th century. Markets, it seems, will offer up things of value in unexpected ways. And almost nothing modern is truly modern.