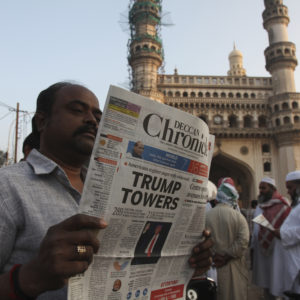 If you’re waiting for President Donald Trump to renegotiate NAFTA or whack China with high tariffs, you may be waiting a long time. The politics and legalities of these moves are about to get caught up in the meatgrinder of presidential triage, as the transition team has only a few months to turn Trump’s campaign program into a governing agenda.

The pressures are already building on Trump to take a slow approach to his goals on trade policy, which he turned into a powerful political issue during the campaign. A president has the power to do a lot of things that would immediately interrupt trade flows or upend previous agreements.

But the slightest whiff that he might do so will bring out the knives, wielded not by Mexicans or Chinese but Americans whose livelihoods and profits depend on preserving the status quo. And Trump is already listening to Wall Street, which frets about the impact of trade wars on financial markets.

To be sure, the coming Trump administration can halt any forward movement that might still be left toward creating big Asia-Pacific and European free-trade agreements. The Obama administration abandoned plans for ratification of the former last week, and the latter hasn’t moved quickly at all. They are both now effectively dead.

But advancing the policies Trump advocated during the election will prove far more complicated. The president has a wide range of executive powers to interrupt trade flows for reasons that even middling lawyers could justify, but there would be legal remedies for affected industries. If Trump wants to sit down with Mexico or China to re-negotiate anything, the road could be long, and create space for strong domestic opposition to emerge.

“There aren’t going to be trade wars,” Wilbur Ross, a leveraged buyout specialist, said last week. “We’re mostly going to do it by figuring out what things [other countries] now import from somewhere else that they could just as well import from us.”

Some transition team members clustering around Trump show other signs of being pretty typical free traders. One, Rolf Lundberg, was a lobbyist for the U.S. Chamber of Commerce. Others are members of Congress who voted to authorize the negotiation of the much-maligned Trans-Pacific Partnership. Vice-President-Elect Mike Pence supported free trade as well, though he changed his tune on the campaign trail.

A series of laws designed to give the president leverage in trade negotiations or defend U.S. national security grants the executive wide latitude to curtail imports, as Hufbauer points out in a legal dissection of the issue. After that, it gets tricky.

The North American Free Trade Agreement includes a provision allowing the president to withdraw from the pact within 6 months, but it’s a much more limited move than it seems at first glance, said John Magnus, founder of TradeWins, a consultancy. U.S. trade policy is made under a “dualist approach” in which the president negotiates and Congress implements, so withdrawing from NAFTA is a purely diplomatic step.

“That has to do with what happens at the international, government-to-government level,” Magnus said. “But you still need an affirmative act of the U.S. Congress to change behavior at the border by changing the NAFTA implementation law.”

Trump could use the executive powers of the president to re-impose the kind of treatment of Mexican goods that prevailed before the law took effect on Jan. 1, 1994, Magnus said. That would then face a tough court challenge, probably from the numerous companies whose supply chains straddle the border.

Taking a stick to Chinese imports raises other challenges.

Trump has promised to designate China as a currency manipulator on his first day in office, something that successive administrations have avoided doing. And executive powers would allow him to impose the 45 percent tariff that he promised in the campaign.

As a Trump presidency takes shape, the consequences of that move are becoming more apparent. The Global Times, a publication heavily influenced by the Chinese government, wrote bluntly about what China would then do.

“A batch of Boeing orders will be replaced by Airbus,” the article read. “U.S. auto and iPhone sales in China will suffer a setback, and U.S. soybean and maize imports will be halted.”

Pay attention to that last line. Soybean and corn country was also Trump country in the 2016 election, and Republican members of Congress have bucked their party to defend agriculture in all sorts of ways for decades. It won’t be Democrats howling.

This kind of pressure on a Trump administration would only build over time if he went the slower route of negotiating changes to NAFTA or the rules governing U.S. trade with China, its accession agreement to the World Trade Organization.

“Once you get into the actual mechanics of a trade negotiation, it goes very, very slowly,” said Edward Alden, a trade specialist at the Council on Foreign Relations. “There are stalling mechanisms built into the process.”

Hufbauer also pointed out that Wall Street will be, despite the populist rhetoric aimed at finance during the election, well-represented in Trump’s inner circle. These advisors will have an acute sense of what a U.S.-China trade war, or a disruption of NAFTA trading patterns, would mean for markets.

“Trump is surrounding himself with guys from Wall Street,” Hufbauer said. “They’re going to tell him to avoid a financial shock and make deals.”