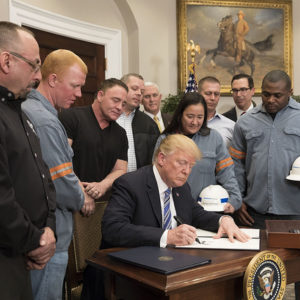 A Trade War Would Affect Our Economy

As the Trump administration seems set on taking us down the path to a full-scale trade war with China, there are those who argue that this will not materially affect the U.S. economy. Sadly, they miss the many indirect channels by which the U.S. economy can be affected by a trade war. They also seem to overlook our very unfortunate experience in the 1930s with the beggar-thy-neighbor policies triggered by the infamous Smoot-Hawley Act.

The basic argument of the trade war optimists is that the cost of increased import tariffs would be small in relation to the size of the U.S. economy. In a worst-case scenario, they argue that even if President Trump were to impose a 10 percent import tariff on $500 billion in Chinese goods, the increased tax on U.S. consumers would amount to only around $50 billion. That amount, they correctly argue, is small beer in relation to a $20 trillion U.S. economy.

The weakness of the trade war optimists’ argument is that it misses the many indirect channels by which a trade war would materially affect the U.S. economy. In particular, it overlooks how the U.S. economy could be damaged by a significant deterioration in the global economy and in world financial markets.

For a start, the trade war optimists overlook the fact that a trade war would almost certainly have a big impact on the Chinese economy, which is very much more export-dependent than is the U.S. economy. This would seem to be especially the case at a time when the Chinese economy is already slowing as its government tries to rein in a credit boom of epic proportions.

A slowing in the Chinese economy is bound to have a material effect on the global economic outlook. After all, China is now the world’s second-largest economy and for long has been its principal engine of economic growth. In addition, its economic fortunes have a major influence on international commodity prices, which are the lifeblood of all too many emerging market economies. And, together with China, these latter economies now account for more than 50 percent of the global economy.

A second point overlooked by the trade war proponents is that escalating trade tensions can have a damaging effect on global and U.S. investor confidence. This would especially be the case in a world of global supply chains that could be seriously disrupted by rising trade barriers. This point becomes all the more relevant when one considers that the trade war is not confined to China but now also includes Canada and Mexico, our NAFTA trade partners, as well as Europe in general and Germany in particular.

Yet another channel through which the United States can be affected by a trade war is through its negative effects on global financial markets both through lower equity prices as well as through higher interest rates on riskier loans. Anyone doubting the potential of this financial market channel need only consider the steady decline in U.S. and global equity prices over the past two weeks since the U.S. began escalating the trade war. They might also look at the recent swoon of emerging market currencies, the strengthening of the U.S. dollar, and the rise in interest rate spreads on high yield risk products.

It is hoped the Trump administration will find a way to defuse the trade war with China before real damage is done to both the global and U.S. economies. However, judging by the administration’s repeated statements that the United States has the upper hand in a trade war with China, I am not holding my breath for this to happen. It would also strike me as running against the natural course of things to expect to see a Chinese president capitulating to U.S. trade pressure.