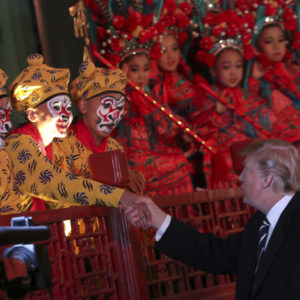 Is a Trade War Really Worth the Candle?

Nobody seriously doubts that China takes unfair advantage of its trade arrangements with the rest of the world and that it routinely flouts the rules. Nobody also seriously doubts that China steals intellectual property on an epic scale. However, before starting a trade war with China on moral grounds, the Trump administration might want to do a cost-benefit analysis of proceeding down that path to determine whether such a war is worth the candle.

There would seem to be three basic questions that the administration should be asking itself in any such cost-benefit analysis. First, how likely is it that China will accede to U.S. pressure to create a more level playing field for trade? Second, how likely is it that higher import tariffs on China will help the administration achieve its basic objective of eliminating the U.S. trade deficit? Third, and most important, what might the costs of a trade war be for the United States and global economies and are those costs worth paying?

As to the first question, it would seem highly unlikely that China will buckle under U.S. public pressure to mend its ways in the area of trade relations. Unlike the United States, China is hardly a democracy and, having recently consolidated his power, China’s President Xi Jinping is very much less subject to domestic political pressure than is President Trump. This would especially seem to be the case ahead of the U.S. November midterm elections where the last thing Trump needs is dissatisfaction in the U.S. Farm Belt that might be caused by Chinese food import restrictions.

It also might be of relevance that China has a very much higher pain threshold than does the United States. This would not be the first time in China’s post-war history that a Chinese leader would allow his people to go without grain in pursuit of a political objective.

By contrast, there is every reason to think the Trump administration’s budget policy that involves a large unfunded tax cut and increases in public spending will cause the U.S. trade deficit to widen. It will do so by reducing public savings and by reviving the ghosts of our twin deficit problem of the 1980s.

As to the all-important question of the likely costs of a trade war, it is well to recall that from a financial market perspective Trump could not have chosen a worse time for a trade war. After many years of ultra-easy monetary policy by the world’s major central banks, global financial markets are now in bubble territory. A trade war could very well be the factor that bursts the financial market bubble.

It is not simply that global equity valuations are still at levels experienced only three times in the last 100 years or that price bubbles characterize a number of important housing markets around the world. It is also that sovereign bond yields are still close to their historic lows while credit risk is being seriously mispriced in the high yield debt market and in the emerging market corporate bond markets.

As the experience of the last few weeks should be reminding us, there is the real risk that the threat of a trade war could be the trigger that causes global financial markets to unravel. That in turn would have very untoward consequences for the U.S. and global economies.

As a foretaste of what could happen, it is worth recalling that since end-January 2018, the U.S. stock market alone has lost 10 percent in value, which is equivalent to 15 percent of GDP. This has to raise the basic question as to whether the costs from engaging in a trade war with China might well exceed any gain that we might derive from getting China to buckle to our demands for fairer trade.

Tempting as it might be for the administration to vent its displeasure with China’s unfair trade practices, one must hope that it thinks carefully before rushing into a trade war. If it does not, we should brace ourselves for some very rough sledding in the U.S. and global economies.